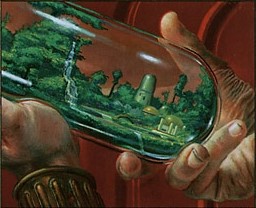 Feroz's Ban was a magical shield around the world of Ulgrotha erected in 3910 AR by Feroz to keep other planeswalkers from harming the plane and its inhabitants.

After witnessing what the arrival of a planeswalker like Taysir could do to the fragile balance of the plane (like the banishment of Sandruu and the destruction of the mural history of the Anaba minotaurs), Feroz and his wife Serra decided it was time to do something. On their isle, the two settled down to work. Studying the sole mana stream available to the plane, ancient tomes on spell construction, and analyzing one of Serra's artifacts, a device that could cast an incredibly strong barrier of force, they endeavored for nearly a year. Then, on the night when the flow of mana was at its strongest, for it was solstice on the world where the mana came from, Feroz cast a powerful spell, his Ban, that sealed Ulgrotha off from the other planes.[1]

The Ban was erected for the purpose of preventing other planeswalkers not only from reaching the plane, but also from using the denizens of Ulgrotha for their duels. The plan was a complete success, preventing planeswalkers from even scrying or detecting Ulgrotha for many years. Because of the Ban, the Great Wood flourished and the Force of Nature called Autumn Willow was made manifest. Another side effect of the ban, however, caused a wild surge of uncontrollable mana during an experiment held by Feroz, causing the death of the planeswalker. Without its maker, the Ban slowly started to unravel, until Ulgrotha fell once again prey to the whims of planeswalkers.[2]