Fallen Empires is the fifth Magic expansion and was released in November 1994. It is not considered part of any block. 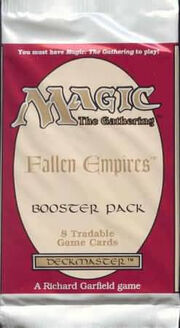 The Fallen Empires lands have a unique red-tinted text box.

Fallen Empires was the last set to use the tilted-T tap symbol.

Fallen Empires was sold in eight-card packs which included six commons and two uncommons. The availability of multiple versions of Fallen Empires commons was an experiment to see if players liked to see more art on commons, but it was ultimately decided that having too many artworks associated with one card made it more difficult for players to identify a card quickly.

The frenetic pace of 1994 had blinded everyone to the reality of an upward limit to the number of cards a small set could sell: Fallen Empires was overproduced. Cards were available from mid November 1994 to sometime in 1998. Although they stopped shipping in late January 1995, enough cards were printed to keep them on the shelves for years afterwards. Even some 15 years after the initial release, booster boxes can be found at roughly the same price as when they were first released. The print run was announced by Wizards to be between 350-375 million cards. The failure of Fallen Empires to sell on time, plus the additional expense of warehousing the unsold product, caused WotC considerable expense, particularly when it is considered that Revised, which was in short supply, had been scaled back to accommodate the orders for Fallen Empires.

After Fallen Empires, WotC would carefully decide how much of a particular product to print. It was a total swing of the pendulum. A formula was established by the Sales team at Wizards, and how much new product the distributors received was based on how they scored on the profile. How much the local retailer got was in turn determined by the distributors, each of whom had different ways of deciding how much of their allocation would go to the retailers. Some of the allocation would go to mass-market retailers which didn't have games as their core-business.

After the Brothers' War, on the Dominarian continent of Sarpadia, the Ice Age is approaching. The changing climate results in dwindling resources and fighting amongst allies for survival.

As a result of this expansion, and some other cards like Frankenstein's Monster, only +1/+1 and -1/-1 counters were used to modify creatures (with a few exceptions). This changed with the introduction of Ability counters in Ikoria, and subsequently, Commander 2020.

The following creature types are introduced in this expansion: Fungus, Homarid, Orgg, Soldier, Thrull, and Townsfolk (later changed to Human). Camarid, Citizen, and Saproling also appeared on tokens produced by cards in this set.

One of the most famous misprints of all time was a run of Fallen Empires that was printed with backs from Wyvern, another TCG being manufactured at the same factory. These cards are very valuable, with fluctuating prices.