Falkenrath is one of the main vampire bloodlines on Innistrad.

The Falkenrath line, concentrated more in Stensia than the Markov line, had a famous falconer (now dead) as its progenitor and remains associated with far-reaching activity and predation. Falkenrath are the boldest in walking among humans, taking pleasure in choosing their victims from deep within human communities that consider themselves safe. Falkenrath elders are more likely to master powers of flight than those of other lines. Even before Avacyn's return, the vampires of the Falkenrath line were the most brazen about their predation. Accordingly, the angels struck hard at the Falkenrath line when Avacyn emerged from the Helvault. 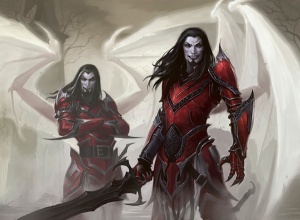 In the middle strip of the Geier Reach, between the Hofsaddel and Getander Passes, lies Castle Falkenrath, a towering, menacing Gothic masterpiece that houses scores of vampires of the Falkenrath line. Although the bloodline's progenitor is long dead, the castle is meticulously maintained. Smaller manor homes exist around the castle and along the border with Kessig, but Castle Falkenrath is the home base from which Stensia's most dominant vampires conduct their ambitious predations. Avacyn destroyed Castle Falkenrath during the events of Shadows Over Innistrad, scattering the remaining members of the bloodline.[1] In the wake of Avacyn's return and Sigarda's protection, the Heron's Grace monastery was founded on the ruins.

The Falkenrath bloodline was the most affected bloodline by Emrakul's corruption.[2] Already feral and monstrous before the Eldrazi's arrival, the corruption changed them into batlike monsters, sometimes barely resembling humans at all. The vampires themselves atttributed the transformation to a plague called the 'Boiling Blood', driving them to solitary lives stalking the passes of Geier Reach. While most have become solitary predators, a particularly old scion of the family named Anje Falkenrath has gathered a hunting pack of her kin. Anje has a goal beyond feeding: she wants to reclaim Castle Falkenrath from the monks who live there.