From MTG Wiki
(Redirected from FNM)
Jump to: navigation, search 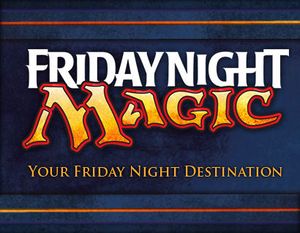 Friday Night Magic generally uses formats which are accessible to its player-base, with Limited and Standard being common. It is considered by Wizards of the Coast to be one of the most successful play programs in their history.[1] To make it easier on newer players, FNM tournaments are run at Regular rules enforcement level, which is the least stringent REL. This is used to encourage players to learn the correct way to play, readying them for stricter tournaments

FNM is known for its prize support, which until September 2017 included a monthly foil card which each winner received, known as a FNM promo. Starting with the release of Ixalan, FNM "seasons" were aligned with set releases, and promos were changed to foil double-faced tokens.[1] This move was motivated by the wish to target to provide a space for the "interested player" in a more casual setting.[2] The "engaged player" would instead be serviced by the Standard Showdown.[3][4][5] While this experiment with special premium tokens was aimed at fostering a fun, inclusive environment for Friday Night Magic, the real-world results did not match to Wizards's expectations. That, coupled with the community's negative feedback, led them to change back in April 2018.[6] These are now chosen later in the process. Combined with many of the Play Design changes, it should lead to more tier 1 cards, and fewer misses.[7]

From Core Set 2020 onward, dedicated FNM cards are replaced by a card from the WPN promo pack, distributed at the discretion of the stores.[8]