Ezuri is a one time elven bandit who turned into a hero after the Phyrexian compleation of Mirrodin. Although he was among the first on the plane to detect the invasion, he ultimately fell to the Progress Engine and was compleated.

Previously a bandit, Ezuri changed his ways during the Phyrexian invasion. He began organizing his fellow Viridian elves into groups that would fight the invaders and established refugee camps for Auriok, Sylvok, and Vulshok survivors. One of them included a shaman artificer.

After the Tangle was dominated and altered by Glissa Sunseeker, Ezuri organized the remaining elves and Sylvok and gathered them into the treetops where they were safe from the corruption. He soon led them to join the resistance movement for Mirrodin, hoping for something positive to happen that would end their plight.

When Ezuri first met with Elspeth Tirel, Koth, and Venser, Venser insisted that they had to continue to find Karn, however, Ezuri said that he could allow them to go no further, and revealed that the Phyrexian invasion had profited him greatly, catapulting him into a heroic leadership position that he was loathe to give up. When Elspeth threatened Ezuri, however, the elf backed down and his followers fled after a display of Venser's magic. Eventually, the trio found Ezuri's rebel camp after rescuing Melira, and a council was called where Ezuri, hoping to become more influential, invited Melira to stay with them while subtly telling her companions to leave. Melira said she would continue with them, however, and Elspeth and the others prepared to leave for the core to try once more to find Karn. While they were leaving, the camp was attacked by Tezzeret's Phyrexians, and the companions found a guide to take them to the core.[1] 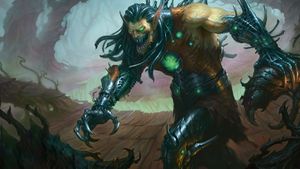 Melira and the Planeswalkers had left Ezuri's camp before Ezuri was inoculated against Phyrexian infection. He eventually was captured and compleated by the Progress Engine, Jin-Gitaxias's blue-aligned faction of Phyrexians.[2] Following an excruciating process of transformation Ezuri became an agent of New Phyrexia's will. As the 'Claw of Progress', he now seeks to extend the Phyrexians' gift of “perfection” to his former allies.