From MTG Wiki
(Redirected from Emblems)
Jump to: navigation, search 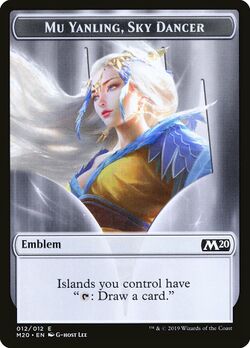 An emblem is a marker with an ability on it, created by Planeswalker cards.

An emblem is different from a card or a token. The ability and the controlling player are the only characteristics it has. Emblems have no color, name, card type, or anything else — just that ability. They are placed in the command zone, which is the same place where Archenemy schemes, Planechase planes, Vanguard cards, and EDH commanders are placed. An emblem is not a permanent, and absolutely nothing can touch it or get rid of it as long as the player who gained it remains in the game, simply because no cards say that they can.

Restarting the game eliminates all emblems, and subgames are unaffected by emblems in the main game.

Emblems were created in the July 2010 rules update to fix rules revolving around Elspeth, Knight-Errant's ultimate, which left an effect hanging over the game without any visual indicator.[1] Elspeth could theoretically "go off" and then be shuffled back in the deck or somehow end up totally out of play, but still have her indestructibility clause hanging over the battle for turns to come. This situation left open the possibility that players would just forget about it.

Emblems are cumulative, so it's possible to have the same emblem multiple times, but not all emblems have abilities which are cumulative themselves.

The Emblem for Sorin, Lord of Innistrad from Dark Ascension was the first emblem to be actually printed.

Starting with Magic 2015, emblems have a type line, which includes the Planeswalker subtype.[2] That does not change the rule from 114.3 that emblems do not have any types, and the types on the emblem are only present as visual representation.

This was reverted in Core Set 2020 where the name of the card creating the emblem is now again in the name line and the type line only displays "Emblem". This change brings the current design closer to the original design and reflects the emblem rules better.

Emblem
An emblem is a marker used to represent an object that has one or more abilities, but no other characteristics. See rule 114, “Emblems.”