Eldrazi is a creature type describing an ancient race native to the Blind Eternities that have neither physical form nor color alignment. Their nature is ceaseless hunger, so they travel between planes devouring the mana and life energy until the plane's destruction. Three Eldrazi titans were bound on Zendikar in aeons past: Emrakul, Ulamog, and Kozilek. Emrakul warps biology, Ulamog warps physical properties and Kozilek warps reality.

It is unknown whether more titans exist elsewhere in the multiverse.[1] Each titan lives outside of the planes. When one wants to feed, it extends a part of its "body" into the plane, to create a physical manifestation of itself there, as well as an army of drones that are extensions of its body and will.

The spirit dragon Ugin compared this to a man sticking his hand into a pool of water; the man being the Eldrazi titan and the water a plane. The fish—those who dwell on the plane—see only a part of the man—his hand. Likewise, the inhabitants of a plane can see only a part of each titan. Even if the lesser Eldrazi appear to be independent beings, their physical forms are just part of a greater entity outside the plane; they are all just part of the titan that made them.

The Eldrazi were introduced as a creature type in Rise of the Eldrazi and returned in Battle for Zendikar. Some of the cards were reprinted in Modern Masters 2015[2] and Duel Decks: Zendikar vs. Eldrazi.[3] The Eldrazi from the original set all featured the annihilator mechanic.

Drone is an additional creature type for some Eldrazi. They are generally smaller and are aligned with colored mana. Those of Battle for Zendikar, though still requiring colored mana to cast, have devoid and are therefore colorless.

Processor is an additional creature type for some Eldrazi, introduced in Battle for Zendikar. Each one has an ability that requires you to put your opponent's exiled cards into their graveyard for some effect.[4] During design, this mechanic was known as "digest" or "process".[5]

Scion is an additional creature type for some Eldrazi tokens. They are colorless 1/1 creatures that can be sacrificed for

Spawn is an additional creature type for some Eldrazi tokens. They are colorless 0/1 creatures that can be sacrificed for

Though each lineage has distinct anatomy, each of them seems to have a commonality. Each has a proboscis located somewhere near a joint that acts as a feeding tube, attaching to a subject and draining them of life. Eldrazi proper and their infant spawns have no color alignment and the mere presence of larger Eldrazi can cause reality to dissipate. However, Eldrazi drones born to serve the larger base species are often aligned, being few examples of the creatures that are colored. Eldrazi drones, while formidable, are not as powerful as their larger counterparts and do not have the Annihilator ability.

The Eldrazi are genderless, lack apparent biological sex, and display no awareness of the concept of gender. However, the question of their gender, or at least proper pronouns, is a recurring topic among players.[7][8] Arguments for gendered pronouns rest largely on comparisons to the Zendikari deities they inspired, and on dimorphism between the broods.[9][10] The issue has been further muddied by inconsistent pronoun use in official sources. In particular, Emrakul has been referenced by male, female, and neutral pronouns.[11][12][13] The most recent official sources on the matter are cards from Battle for Zendikar and a blog post by creative director Doug Beyer, which agree on the use of male pronouns for Ulamog and Kozilek and female pronouns for Emrakul.[14][15][16]

While in general unfathomable, the telepath Jace Beleren managed to communicate with a conceptualization of Emrakul within his mind while on Innistrad. The conceptualization acknowledged that she did not really realize that the telepath existed and that what he had seen was an attempt of his mind to conceptualize something that could not be understood otherwise.[17] It is unknown if the other two Eldrazi titans had similar means of expressing themselves. When attacking a large Eldrazi, the vampire Drana had visions revealing that the Eldrazi of Ulamog's lineage knew they shouldn't be on Zendikar. When caught in Kozilek's reality-warping field, General Tazri had another Vision in which Kozilek obliterated the Gatewatch, proving his awareness of the planeswalkers.

Eldrazi are known to follow leylines to move on a plane's surface.[18] 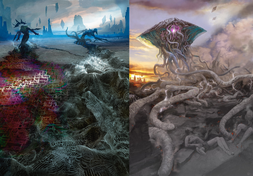 Type of trail left by the Eldrazi Titans and their lineages.

The Eldrazi have various means of consuming planes, that vary among broods and situations:[19]

If too much of a plane is consumed it will break apart in a flash of light.[21]

Millennia ago three planeswalkers (Sorin Markov, Ugin, and Nahiri) decided to rid the Multiverse of these terrible creatures. Ugin told them that it wouldn't be a good idea to destroy them and instead helped them imprison the Eldrazi on the plane of Zendikar.

The Three decided to force the Eldrazi into physical form and trap them on a plane, sacrificing that plane for the well-being of the Multiverse. They searched for a plane with lush ecosystems and uniquely dynamic mana—a powerful lure for the Eldrazi's insatiable hunger. They decided on Nahiri's own Zendikar. Sorin Markov lured the Eldrazi to the plane, directing their hunger to that unique mana, Ugin used his invisible breath to combat the Eldrazi and his colorless magic to bind them to the plane, and Nahiri had constructed a massive network of stone hedrons, whose power would form the bars of a planewide prison, forever preventing the Eldrazi from leaving.[21] Ugin arranged the hedrons to direct leylines of energy, which were not to be disrupted.

The planeswalkers concentrated the power of their imprisonment spell in a secret location deep inside Zendikar's mountains of Akoum: a subterranean chamber called the Eye of Ugin. To make sure that the imprisonment would not be broken, the three planeswalkers sealed the chamber with a mystical lock: the Eye of Ugin could only be reactivated by the presence of three planeswalker sparks—and the colorless, invisible breath of Ugin, the spirit dragon himself. The planeswalkers' trap worked. Emrakul, Ulamog, and Kozilek manifested in physical form on Zendikar, became confined by the magic of the network of hedrons, and thanks to the magic of the imprisonment spell, sank into harmless dormancy. Their mission complete, the planeswalkers disbanded. Sorin and Ugin left the plane, while Nahiri remained to watch over Zendikar and protect the eldrazis' prison.[21]

A few thousand years after the imprisonment of the Eldrazi by The Three, the noxious creative force of Ulamog became an infection that took hold of the people who dared to live in Akoum's mountains despite the tectonic instability of the region.[22] They became a sort of cult devoted to an imagined deity of the mountains, established a temple near the site of the prison, and began performing rituals inspired by their growing madness. The cultists avoided the notice of the increasingly reclusive Nahiri and over time and multiple generations, their rituals actually proved effective in loosening the bonds of the Eldrazi prison.

When the hedron network was disturbed, their prison proved tenuous, and they came close to breaking free. Legions of lesser Eldrazi drones awakened. Once again, the Brood Lineage appeared.[23] They wreaked havoc upon Zendikar, consuming its mana and massacring its inhabitants. But they were unable to return to their original form and thus unable to leave Zendikar. Nahiri, who had remained on Zendikar to keep watch, called for aid from Sorin and Ugin. When her beacon went unanswered, alone she identified the disturbance in the hedron network and repaired it, returning the Eldrazi to their slumber.[23]

During the rampage, the cultists underwent a transformation. Only twelve of them survived the initial wave of spawn emerging from the prison, but those twelve became the first vampire bloodchiefs, the progenitors of the vampire race.[22]

Rise of the Eldrazi[edit | edit source]

And now, thousands of years since they last fed on the plane, the Eldrazi stir once more. The meeting of Sarkhan Vol, Chandra Nalaar and Jace Beleren in the Eye of Ugin chamber loosened the bonds that kept the Eldrazi in torpor, and they now rise to feed on the life of Zendikar again. Across the plane, the dormant stone hedrons come to life, changing or combining into bizarre superstructures, bending the laws of nature around them. A new generation of the brood lineages shudders into existence around their colossal progenitors, and the carnage is immediate. Each of the three colossal Eldrazi spawns its own "brood lineage." The three brood lineages are composed of Eldrazi drones and other subordinate beings, each reflecting the image of its progenitor. This time only Sorin Markov finds himself on Zendikar, and in the absence of his companions, he allies with the elf planeswalker Nissa Revane to combat this great danger. Nissa's plans abruptly changed from what Sorin had expected. Instead of helping Sorin reinforce the spell containing the Eldrazi, she shattered the main Hedron and released the enchantment imprisoning the titans. Nissa thought the titans would flee, that they would leave Zendikar far behind them. She was wrong, and Sorin washed his hands of her and the entire plane, choosing to go about his own business once more since Nissa wouldn't heed his instructions.

Nissa took up the fight and was joined by Chandra Nalaar and two new planeswalkers: Gideon Jura and Jace Beleren. With the help of the merfolk Jori En, they studied the leylines between the hedrons and rallied the Zendikari troops against the brood of Ulamog.[24] The four planeswalkers realized that they were helpless against large threats on their own, but that they could stand against just about any force in the Multiverse by working together. Thus they swore an oath to stand together and the Gatewatch was created.[25] Seeing that he could not keep his promise to Ugin to not harm the Eldrazi nor allow them to escape from Zendikar, Jace decided to slay the titans with the Gatewatch's and Kiora's help. After consulting with Nissa, he described the Leyline pattern to her that would bind Kozilek and Ulamog to Zendikar, drawing the bulk of the titans into the plane so that their energy could be dispersed into Zendikar, killing them in the process. To attract them, the remaining forces of Zendikar's defenders would pose as a bait.[26]

While the plan worked at first, with Gideon keeping the Eldrazi swarms away from the army, Kiora clearing out any other swarms and Chandra supporting them, once the Eldrazi titans were anchored to Zendikar, their destructive essence threatened to assimilate Zendikar into themselves. Afraid, Kiora tried to persuade Nissa to release the titans and allow them to flee, but Jace objected. Chandra offered to burn the titans instead and after preventing Kiora from attacking Nissa, Jace agreed. The pyromancer then connected with the animist, allowing her to channel her pyromantic magic through Zendikar's leylines directly into the titans. In one brilliant stroke of flame, Ulamog and Kozilek were incinerated and destroyed, leaving only ashes raining from Zendikar's sky. Even though Ugin considered the two titans destroyed, it is unknown whether the flames truly destroyed the two titans or solely their planar avatars. [27]

Meanwhile, Emrakul has left the plane for destinations unknown. Later, it arrived on Innistrad after being summoned there by Nahiri to take revenge on Sorin. After wreaking havoc and corrupting a large part of the plane, she allowed herself to be imprisoned into Innistrad's moon for an unknown purpose.

Rise of the Eldrazi featured four tribal Eldrazi cards, which were cheaper to cast with an Eye of Ugin in play: