The two decks represent the forces of the Zendikari and the Eldrazi fighting over control of the plane of Zendikar. They contain six preview cards for Battle for Zendikar: Sheer Drop, Retreat to Kazandu, Veteran Warleader, Oblivion Sower (alternate art), Dominator Drone, and Forerunner of Slaughter.[3]

Three older cards receive new artwork: Avenger of Zendikar,[4] Consume the Meek, and Primal Command. Rocky Tar Pit is printed in a modern card frame for the first time. Forked Bolt is printed as a common; a downshift in rarity from its original printing as an uncommon.

The Duel Decks include a Magic “learn to play” guide, a strategy insert, two spindown life counters, and 5 tokens each.

Drawing on the powerful mana that surges through the roiling land, Zendikar's forces have joined together to defend their plane. The Eldrazi titans, trapped for thousands of years, have broken their bonds. Now their numberless spawn begin to overrun Zendikar. Can Zendikar resist this onslaught? Or will the Eldrazi triumph? 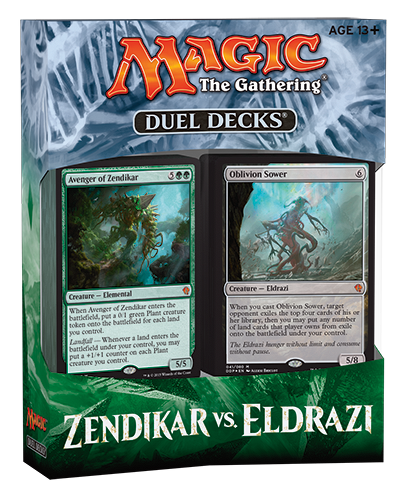 0/1 Plant creatures for Avenger of Zendikar.

The rares in this deck are Butcher of Malakir, Consume the Meek, Hellion Eruption, It That Betrays, Magmaw, and Oblivion Sower (foil mythic).

4/4 Hellion creature for Hellion Eruption and

0/1 Eldrazi Spawns for Emrakul's Hatcher and Pawn of Ulamog.