Duel Decks: Phyrexia vs. The Coalition 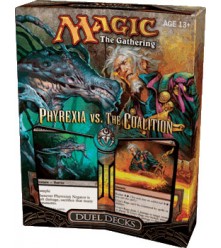 Released in anticipation of Phyrexia's invasion of Mirrodin in the Scars of Mirrodin block, Phyrexia vs. The Coalition is based on the story of the Phyrexian invasion of Dominaria, depicted in the Invasion block and its accompanying novels.

Numerous cards in Phyrexia vs. The Coalition are reprinted from sets prior to Invasion; however, this is consistent with Magic canon, as both Urza and Yawgmoth had set millennia-long plans in motion, which would culminate in the Invasion and the Coalition's resistance to, and eventual defeat of, the Phyrexians.

The set featured a card that had been placed on the Reserved List: Phyrexian Negator. This was possible at the time, because of the loophole that permitted the cards to be printed as premium foils.[5][6][7] However, concern from the community about future reprints prompted Wizards of the Coast to alter that policy.[8][9][10]

The rares in this deck are Urza's Rage (holographic foil), Coalition Relic, Darigaaz, the Igniter, Gerrard Capashen, Rith, the Awakener, and Treva, the Renewer.