The Duel Decks: Mirrodin Pure vs New Phyrexia was announced on February 8, 2011 [2] and was released as a Magic Online product on January 11, 2013.

The Duel Decks announcement was also a competition where any MTG community member could send in a decklist representing a faction.

The rules were as follows:

The winning decklists were actually submitted by Gavin Verhey, in his time before he would come to work for Wizards of the Coast.[3] 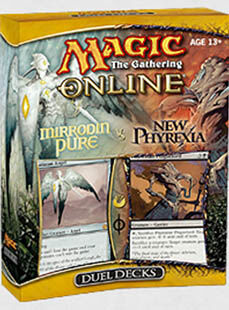 2 Seat of the Synod

1 Triumph of the Hordes