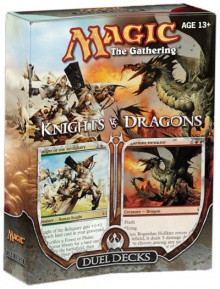 Knights vs. Dragons contains two preconstructed theme decks, one centered around Knights and the other around Dragons. The set has a tribal theme and plays out the well-known folklore tales and myths of knights hunting down and slaying dragons, such as the episode of Saint George and the Dragon.[4]

In addition to this, the Duel Deck contains a Magic "learn to play" guide, a strategy inset, and two copies of

1/1 Goblin creature tokens, which are created by the card Dragon Fodder.

1 Knight of the White Orchid

1 Knight of the Reliquary

The rares in this deck are Knight of the Reliquary (holographic foil), Kinsbaile Cavalier, Knight Exemplar, Knight of the White Orchid, Knotvine Paladin, and Loxodon Warhammer.