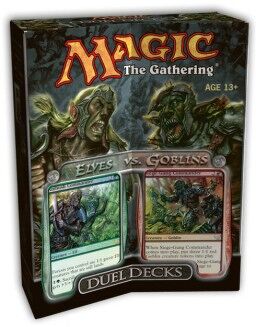 Elves vs. Goblins contains two preconstructed theme decks, one centered around Elves and the other around Goblins, featuring cards from the previous six years of Magic, from Apocalypse to Lorwyn.

1 Voice of the Woods

The rares in this deck are Ambush Commander (holographic foil), Allosaurus Rider, Slate of Ancestry, and Voice of the Woods.[6]