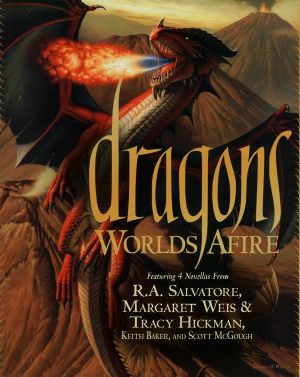 Dragons: Worlds Afire is a collection of four novellas about dragons, each set in a different world. It was first published as a hardcover in June 13, 2006 and reprinted as a softcover in July 1, 2008.

The stories and their authors are:

This article mainly deals with the fourth novella.

The story begins with a dragon terrorizing the countryside, while the Pixie Vaan watches, vowing that it won't happen again.

Vaan has organised a group of dragon slayers, consisting of potionmaster Donner Rus, his apprentice Tania Cayce, anchorite druid Kula and the troop of Captain Hask, including the golem Boom. Their quest is hampered though, as Vaan has been enslaved by the dragon, who places a geas on him to prevent him from divulging crucial information.

Rus decides that the task is far too difficult, and poisons the others with sleeping powder. He takes Tania to the dragon's lair and tells her to go in and steal some rare alchemical components, such as dragon scales, teeth and claws. Once they have these they plan on getting back to civilisation as quickly as possible, but they are found out by the dragon. Vaan saves Tania, but Rus is incinerated. All his poisons proove unable to harm the dragon, but they do interfere with the pixie glammer on it, revealing it is not really a natural dragon, but a Dragon engine.

When Vaan takes Tania back to the group and she reveals this information, it turns out that both Kula and Hask's group have a history in dealing with artifacts, just as Vaan planned. They venture into the cave and face the dragon, but to little effect. Tania figures out that the discarded dragon skeleton in the dragon's treasure pile is of importance, but not its complete purpose. Vaan is mortally wounded by the dragon, and Hask draws the Hand of Righteous Retribution, a magical sword, and uses a spell that grievously wounds the dragon.

As he is dying, his geas slips, and Vaan is able to show Tania a vision that explains it all. Vaan's people had been enslaved by the dragon Zumaki of the Bottomless Pool, an ancient dragon who used the pixies to indulge in the illusions of their glamours. It was attacked by a dragon engine, and with its mind clouded by the glamours, it could not fully resist it. Both Zumaki and the engine were killed in the battle, but the engine's infiltration and regeneration abilities created a merger between the two, with the body of the engine (disguised to look like Zumaki by the glamours of Vaan) and a twisted version of Zumaki's mind. The dragon Tania's group has been fighting is this merger, and it can only be destroyed if the Engine and the skeleton of Zumaki are destroyed simulataneously.

Vaan dies, and his vision fades. Tania finds the merger-dragon regenerate from Hask's attack, and quickly takes the Hand of Righteous Retribution and uses its power to destroy it and the skeleton. She is knocked unconcious by the blast.

When Tania wakes, she is in the arms of Kula. Alongside Hask, Boom and a single soldier, they are the only survivors. Kula offers to train Tania in the ways of the druids, but she deciedes that she's not really looking for a new master after what Rus made her do.

Back in the dragon's lair, the merger dragon rises, and brings Vaan back to life. Devestated that even this group couldn't defeat his master, Vaan goes back to being a slave of the beast, until he can think of a better plan to have the dragon killed.