Dragons of Tarkir contains 264 cards (15 basic lands - 5 less than Khans of Tarkir[6] - , 101 commons, 80 uncommons, 53 rares, 15 mythic rares) and includes randomly inserted premium versions [7] of all cards. Like the one from Scourge before, the expansion symbol of Dragons of Tarkir represents a dragon's head. This set is supposed to be the ultimate "dragon set".[8] There are more than twice as many dragons in it than in any other set and they appear in all colors. It also contains many cards that reference Dragons and care about Dragons.[9][10][11]

Each of the five clans known from the previous sets is now integrated with one of the Dragon broods. Only the icons of the broods, first seen in Fate Reforged, appear as watermarks in the text boxes of the cards. The clan symbols have disappeared.[12] The icons have no effect on gameplay.[13] There are several "crossover cards" that present alternate versions of characters and situations from the previous timeline.

After Sarkhan Vol has done his duty in the past, the story now returns to the present of Tarkir. But it seems that changing the past has produced some unexpected results.[14] Mighty Dragons now rule the skies and the five clans that comprise most of Tarkir's populace.[15][16] Known characters have an altered fate; Zurgo is just a puny orc and Narset has not died at all, but became a planeswalker instead. 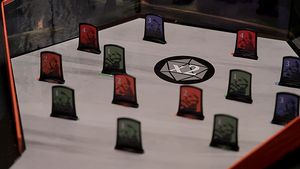 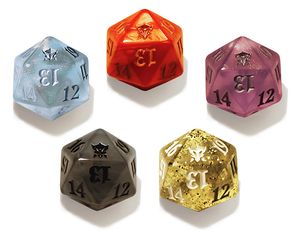 The Dragons of Tarkir prerelease took place on March 21–22, 2015. As a special gimmick, each participating store received a Tarkir Dragonfury playing board with character pieces that stand upright on them.[18] The board is a Tarkir landscape, and the pieces can knocked down by a throw with a special spindown life counter, themed to the breath weapon of one of the five Tarkir dragonlords. Each piece has a point value on it, and the player gets points equal to the total number he or she knocks down. If the die ends up in the central circle, the score is doubled. Every player gets two rolls (resetting the board between each roll). Depending on the highest score, up to four alternate art promotional cards can be won: a land, a common, an uncommon and a rare.

Players choose a clan. Each player receiveds a Seeded Prerelease pack that had everything he or she needed to build his or her sealed deck. 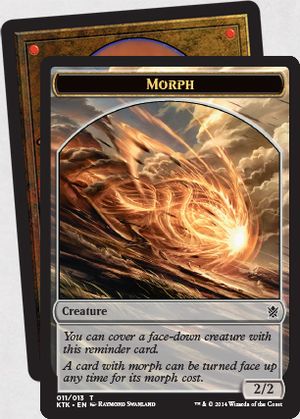 The sixteenth card in the boosters can be a token, emblem or overlay card, with an advertisement on the back side.[20] The overlay card can be used on face-down Megamorph cards to remind players of their power and toughness and that it can be turned face-up for its Megamorph cost.[13]

Obviously, Dragons mattered in this set.[21]

Bolster and Dash returned from Fate Reforged, as the mechanics for the green-white Dromoka and black-red Kolaghan clans, respectively.[13][22]

Rebound was repeated from the Rise of the Eldrazi set, and became the mechanic of the white-blue Ojutai clan.

The set sees the return of the elder type, which is used for the Dragonlords.

Dragons of Tarkir has eleven cycles:

Naturalize, Summit Prowler, Tormenting Voice are first non-basic land cards that are reprinted within the same block in Magic history.

Dragons of Tarkir has one event deck.[29]