Dragon's Maze is the third set in the Return to Ravnica block. It is the 61st Magic expansion and was released on May 3, 2013.

Dragon's Maze was the only small set in the block. It contains 156 cards (70 commons, 40 uncommons, 35 rares, 11 mythic rares), including randomly inserted premium versions[2] of all cards in the set. The set focused on the guild system, featuring all of the ten guilds from Ravnica, and multicolor cards.[3] Dragon's Maze and its boosters did not contain any basic lands; however, as a first in Magic history, the set contained same-block reprints (the non-basic guild gates). Besides these guild gates, boosters could contain shocklands with Return to Ravnica or Gatecrash expansion symbols, and the mythic rare Maze's End. The frequency at which these cards are found in booster packs are at the same as any other card at their respective rarities.[4]

Dragon's Maze featured Izzet planeswalker Ral Zarek and, as a throwback to the original Ravnica block, guild champions (maze runners). The expansion symbol is an overlap of the Return to Ravnica and Gatecrash expansion symbols. 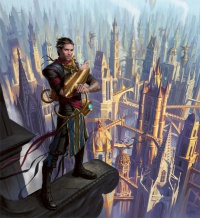 The Implicit Maze is a system of mana paths or leylines through the guildgates and districts of Ravnica that has manifested after the Guildpact was destroyed. On instruction of Niv-Mizzet and using Jace Beleren's notes, it was discovered by Ral Zarek. The maze was created by Azor I to be revealed in case the Guildpact dissolved. In this way, the founder of the Azorius Senate tried to foster an atmosphere of peaceful collaboration. At the end of the maze in the Forum of Azor lies great power. In order for it to be solved, all the guilds of Ravnica must participate at once. Niv-Mizzet has announced that each guild will send one champion as its delegate in the running of the maze. At an appointed time, the champions meet at the Transguild Promenade, and embark on a race through the twists and turns of the maze. The one who triumphs, gains the power behind it for their guild. Others fall to its dangers. 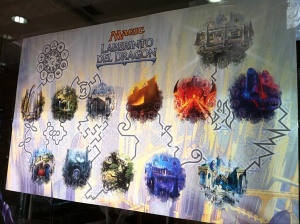 The "Implicit Maze" at a DGM prerelease in Spain.[5] 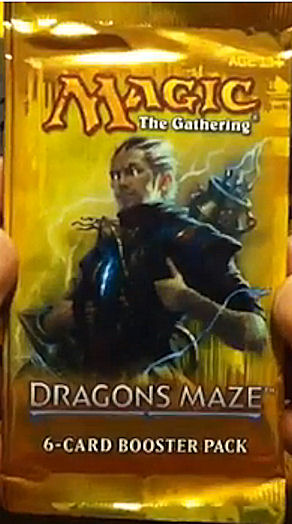 The draft format for Dragon's Maze reverted to the regular format of drafting the three sets in a block (i.e., in reverse order of their release; here, Dragon's Maze/Gatecrash/Return to Ravnica).[10]

On April 27–28, 2013, each prerelease participant received a promotional alternate-art Maze's End, which couldn't be played in the sealed deck. This is in contrast to the sealed events of the Return to Ravnica and Gatecrash prereleases.[4][8] In addition to this, a foil Plains was awarded to every player that participated in the prerelease's "Implicit Maze", making this the only basic land to feature the Dragon's Maze's expansion symbol.[12]

Other promotional cards were:[13]

The sixteenth card in the boosters is a token creature card or an advertisement card. The only Dragon's Maze token card is:

Dragon's Maze received mixed reception, but it was largely panned by Magic writers and professional players. Several favorite elements were considered to be "missing" from the set.[15] However, a few cards in the set were notably regarded as powerful and potentially tournament-playable. These include Notion Thief, a innocuous card draw hoser, and Voice of Resurgence, a competitively costed threat against control decks.[16][17][18]

Limited "bombs" for Dragon's Maze included Ral Zarek, Lavinia of the Tenth, Teysa, Envoy of Ghosts, and Dragonshift. These proved potent at the expansion's prerelease events.[19]

Like the preceding sets, Return to Ravnica and Gatecrash, Dragon's Maze features the bicolored guilds of Ravnica. Each guild has its own keyword or ability word.[20][21]

The expansion also features two cycles of split cards and a new mechanic exclusive to these cards called Fuse.[22][23] Fuse allows players to play both halves of a split card with the keyword ability as one spell by paying both halves' mana costs. Split cards with Fuse also have a new card layout, with the boxes containing the name and type line forming arrows that point medially, towards to midline of the card. In addition to this, each split card with Fuse has a separate text box containing the Fuse mechanic and its reminder text that spans the bottom of both halves.

Other themes and mechanics include:

As the shocklands that appear in Dragon's Maze boosters feature a Return to Ravnica or Gatecrash expansion symbol, they are technically not reprints.[31]

Dragon's Maze is the first expansion set to feature only one event deck.[34]