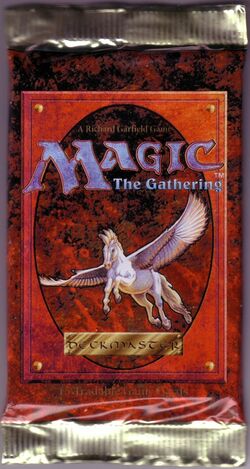 Draft Booster is the modern name for the original booster pack. The re-branding started with Throne of Eldraine, where the Draft Boosters which formed a line up with the newly introduced Theme Boosters and Collector Boosters.[1] A later addition in the line up were the Set Boosters.

Of the fifteen playing cards, nine are common, four are uncommon, and one is rare or mythic rare. This distribution was introduced with Mirage and facilitates Limited play (Draft and Sealed).

Over the years, regular booster packs have grown in size and cost:

The latest expansion set's Draft Boosters retail for US$3.95.