Dovin Baan was a vedalken planeswalker from the plane of Kaladesh.[2] He was an artificer and a system's mage.

Dovin Baan was a tall, thin, and always impeccably dressed vedalken who strove for perfection. His suit was partially encased in whorls and filigrees of brass, bits of which hissed and ticked faintly as he moved. Baan had an innate talent, heightened by magic, that allowed him to clearly see the flaws in any system or machine. After mere moments of scrutiny, Dovin could provide a complete analysis, noting a particular machine's weaknesses, highlighting its shortcomings, and predicting with startling accuracy exactly how and when it will fail.[3] He can do this for a machine, a bureaucracy, a dance — the form matters little, only the process. Consequently, he could perfect the thing, little by little, until it became a true exemplar of what it was meant to be.[4]

Dovin Baan was centered in both white and blue mana. When he planeswalked, he vanished in a sideways movement.

Dovin Baan was the Minister of Inspections of the Consulate of Kaladesh. His admirable success made him serve as senior inspector of the Inventors' Fair.

When he came up against an unexpected and unpredictable renegade threat, he requested the aid of the Gatewatch. The Gatewatch had to refuse to assist Baan, considering his problems an internal affair and antithetical to the goals of their organization. However, his visit alerted Chandra Nalaar of the events happening on Kaladesh, her plane of birth, and she immediately planeswalked to Kaladesh with Liliana Vess.[5] Baan returned to Kaladesh, Nissa in tow. He arrived next to Tezzeret, as he was arresting Renegade Prime, later to be revealed as Chandra's mother, Pia Nalaar. Recognizing Chandra in the crowd, Dovin Baan ordered gearhulks to be brought into a position to isolate and contain Chandra from Renegade Prime. Renegade Prime, however, relented and let herself be taken into custody. Baan was relieved, having arrested Renegade Prime, and serving a blow to the renegade threat he sought to quell.[6] 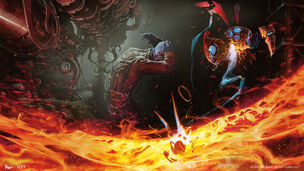 During Tezzeret's coup, Dovin Baan hesitantly cooperated, although he disliked the draconian manner in which the inventions were taken from the inventors. Tezzeret assured him that this was solely done for protecting the inventions since he expected a major Renegade retaliation, and to develop them further in order to usher in a new era of innovation. Tezzeret then revealed that he intended to make Dovin the head of the institution that would manufacture these new, streamlined inventions and make them public among the population of Kaladesh. In exchange, Tezzeret demanded that Dovin Baan take care of the Gatewatch since it was due to his invitation that they were here. Baan immediately went to assembling a group of elite soldiers, intending to use the weaknesses and dysfunctions of the Gatewatch against them.[7] After the Renegades had managed to conquer the central Aether Hub of the city, Tezzeret ordered Baan on the Skysovereign to help construct his battle plans. After examining the situation, Baan pointed out that the majority of the Renegades, under them Renegade Prime, had taken up residence in the hub and that a direct attack would inevitably fail. Instead, he advised to encircle the facility and draw out their commanders, including the planeswalkers, and then strike with aerial support and various armored inspectors. Listing the weaknesses of the Gatewatch, Baan stated that the weakest link of the group was Chandra Nalaar, due to her impulsiveness. Tezzeret then ordered Baral to distract Chandra, exploiting the hatred that existed between both. Baan was wary of this plan since he mistrusted Baral's soundness of mind.

Tezzeret ordered Baan to supervise the operation. Insisting that their confrontation would take place in one of the more dilapidated quarters of Ghirapur, he watched the battle between the Consulate officer and the planeswalkers. When Baral wanted more firepower against them, Baan refused, wanting to keep the citizenry safe from collateral damage. During the battle, Baan heard Baral provoking Chandra, admitting that Kiran and Pia Nalaar had not died in the fire, as he previously stated, but that Kiran had been murdered by Baral himself and Pia was taken into the Dhund without a trial. Charging the officer with murder, attempted murder, and multiple counts of falsification of the public record, Baan ordered Baral's imprisonment. The renegades escaped the encounter at the Aether Hub. As Baral protested and urged Baan to pursue the renegades, Baan informed him that the central Aether Hub was again under Consulate control.[8]

When the Renegades attacked the Consulate's Spire, Baan boarded the Heart of Kiran and sabotaged the Hope of Ghirapur, which was an essential part of their strategy. He then planeswalked away before Chandra could stop him.[9] 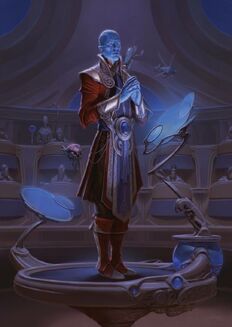 After realizing that Tezzeret was not the true mastermind behind the Planar Bridge, Baan decided to look for Tezzeret's master. Walking right into Bolas claws, he was taken in by the dragon's intelligence and "flawless planning". Bolas then offered Dovin something Dovin couldn't turn down, the chance to reshape a plane into flawless and ordered efficiency. Since his first visit to Ravnica to recruit the Gatewatch, Dovin had itched to improve the guild system, so he willingly jumped at the chance to take over the Azorius Senate on Ravnica.[10] Manipulating the system from the inside, he exploited one loophole after another to disrupt the chain of command. Occupying judges and senators with often overlooked (but technically required by law) paperwork, rescheduling key meetings, and arranging the ousting of people in key positions of power, Dovin emerged as the new head of the Lyev Column, replacing the unpopular hussar Agmand Sarv.[11] When Isperia was killed by Vraska,[12] Dovin took over as guildmaster and showed the guild how to make spy thopters and to use precognitive mages to arrest people before crimes would be committed.

When Ral Zarek altered the Implicit Maze to fulfill Niv-Mizzet's plan of stealing the power of the Guildpact, Dovin found out and played along until the right before Bolas's arrival on the plane and then sabotaged the device, leaving Jace as the Living Guildpact.[10] 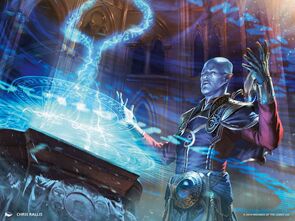 In the War of the Spark, Dovin guarded the Immortal Sun for Bolas. During a fight, he was overpowered by Chandra Nalaar, who actually turned out to be the Dimir guildmaster Lazav in disguise, using an Izzet League flamethrower.[13] Lazav threw throwing stars that hit Dovin in the eyes and blinded him.[14] This seriously affected his ability to detect weakness in others. Bleeding, he planeswalked away shortly afterward.

After being blinded by Lazav, Dovin Baan planeswalked to his home on Kaladesh but soon returned to his safe house on Ravnica.[15] There he managed to lead a fairly regular life thanks to his eidetic memory and started to manufacture appliances to replace his lost eyes. On Ravnica, he was discovered by Vraska, and in exchange for his life, Baan offered to help her retain control over the Golgari. Vraska accepted the offer and together they plotted to fake Baan's death. Using a statue replica of himself, a fight was staged in Zinara on Regatha with Chandra Nalaar being an unsuspecting accomplice. During the fight, Vraska severed Baan’s right hand to use as proof of a kill while Chandra believed she had delivered the killing blow. The plan succeeded and Baan returned to Ravnica, only to be assassinated by Atkos Tarr who had been sent by Lazav in his plans to blackmail Vraska. After his death, Atkos removed Baan’s left hand and secretly passed it on to Lazav.