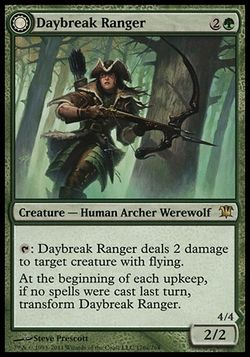 Double-faced cards returned again in Shadows over Innistrad. There are 5 white, 5 blue, 4 black, 7 red, 7 green, 1 multicolored, 3 artifact, and 1 land double-faced cards. These had the transform mechanic again. New rules stipulated that the converted mana cost of the back face of a double-faced is based on the mana cost of the front face.[3] Eldritch Moon introduced a twist with meld, a keyword action that changes the card with meld and a specific other card into one oversized card. That single card only exists on the backs of the two other cards. Whenever the melded card leaves the battlefield, both cards go, and they each turn front face up again.[4] For gameplay purposes, these are NOT considered to be DFCs (see rule 711.1d below), though they occupy the DFC slot in a Shadows over Innistrad booster pack.[5] There are 3 pairs of cards that can meld together: a white pair, a black pair, and a pair consisting of a red card and a land. There are also 15 regular DFCs in Eldritch Moon: 2 white, 3 blue, 1 black, 3 red, 4 green, 1 multicolored, and 1 artifact.

. The front of the card is called the "day" side and has a regular card frame, a mana cost, and the sun symbol. The back or "night" side has the moon symbol and a slightly altered frame similar to planeshifted cards with a darker text box and white text for the card type, name, and (for creatures) power and toughness.

for the front-side and the planeswalker symbol

Double-sided cards enter the battlefield with their front ("day") side up. To switch between the two card faces, the keyword action transform is used. When a permanent transforms, all counters, Auras, and Equipment stay on the card, and the card neither enters nor leaves the battlefield. The Magic Origins double-faced cards and Nicol Bolas, the Ravager from Core Set 2019 are creatures on one face and planeswalkers on the other; rather than simply transform, they are instead exiled and then returned to the battlefield transformed so that they enter the battlefield as planeswalkers and receive the appropriate number of loyalty counters.