Djinn is a creature subtype used for cards that depict certain spirits of air or fire, commonly forced into slavery by mortal beings in order to utilize their immense magical powers, usually in the form of a "wish."

Although some djinn will grant wishes, sorcerers or sahirs usually bind djinn to have them in servitude for a longer time, not just until their wishes are granted. A djinn must be bound into a magical object such as a ring, lamp, cauldron or bottle, and must be weaker than its master.[1] A djinn will seize any opportunity to attack the Sahir if it senses that it has an advantage. Also, some djinn are so powerful that they are able to break free after a certain number of days in slavery. They are highly intelligent and will remember the masters that treated them kindly and those that did otherwise.

Many djinn smell vaguely of smoke.[2]

Note that Efreeti and Ghouls are considered separate creature types in Magic, while they in historical sources sometimes are considered a subclass of Djinni. The first Djinni and Efreeti were featured in the Arabian Nights set.[3]

Djinn, not sphinxes, are blue's iconics on Dominaria.[4]

The Djinn of Dominaria are fickle tricksters whom foolhardy mortals seek to imprison and bind to their will.[5]

An exceedingly rare example of a djinn who dwells in the deep waters of Dominaria near the merfolk kingdom of Etlan Shiis.

Kookus is a type of djinn from the Jamuraan mountains. The local goblins have taken the job unto themselves of containing them. These goblin are also responsible for their very goblinish name, which is pronounced Cook-Us.

At the time of the phyrexian Invasion, several djinni joined the fight on the side of the coalition: Ruham Djinn, Zanam Djinn, Goham Djinn, Halam Djinn, Sulam Djinn.

The first to arrive on Dominaria from their distant home.[6]

On Gobakhan small fire-djinni or air-djinni sometimes emerge from the Western Cloud or the Eastern Cloud respectively. If a djinn is caught, for example within geometry, it has to grant a wish for its release.[2]

Six types of Djinni live on the plane of Rabiah: True Djinn, Djann, Efreet, Nekrataal, Marid, and Ghoul. Since Djinn is both the name for all six of them and the name of one specific group, the term "Djinn Tribes" is used when talking about the six of them together and "True Djinn" for the sub-group, to avoid confusion. Most of the djinn tribes are only native to Rabiah, but they often cross over to planes that have steady portals to Rabiah, such as Wildfire and Dominaria. All members of the djinn tribes have the ability to shapeshift and most of them can fly. 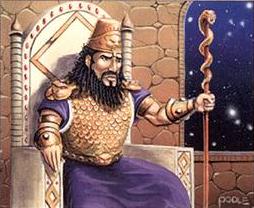 Originally, the djinn were a race of nature, unbound to either good or evil. But when unknown forces made them choose between either light or darkness, the stage was set for a holy war between the rivaling djinn tribes.[7]

Most of the True Djinn decided to remain neutral, although some of them did join either the side of good or evil. Completely converted was the Djann tribe, which followed the path of truth. Of the four remaining tribes, three declared war on the light. First and foremost was the order of the Efreet, ancient arch-enemies of the Djann and inherently evil. The Efreeti led on the other two tribes: the Nekrataal and the Ghoul. The Marids, the oldest, most powerful, and most individual tribe, were allowed to choose their own path as they saw fit. Many turned to the aid of the Djann.

When the djinn tribes of light sought to better their position, the others reacted violently. The leader of the efreets, the demonic Iblis, sought to wipe out the converted djinn. He led an army against the djann and their human allies. The marids, however, intervened and the efreets were forced away. As a result of this conflict the efreet are less powerful these days than they once were, and the marid became rare and secluded. 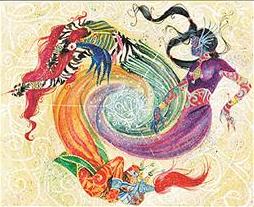 With the power of the djinn fading away gradually due to the constant infighting, King Suleiman seized the opportunity to bind the spirits of Rabiah to his command. As he rose to power he used a serpent staff, a cauldron and a ring to capture seventy djinn, although legend holds it they defied him every possible chance. The most powerful of his enslaved djinn was the True Djinn Shamir, who took the form of a meager worm.

Suleiman even managed to pass on his powers of binding to future generations by creating a magical pentagram that ensured that no djinn or efreet of Rabiah would fail to recognize his name and authority. There are many djinn who seek the blood of King Suleiman’s followers, for his reign over ancient Rabiah led to the enslavement of seventy djinn, and Suleiman was no kind master. 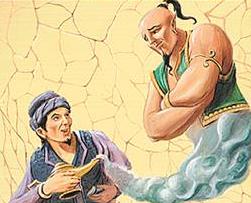 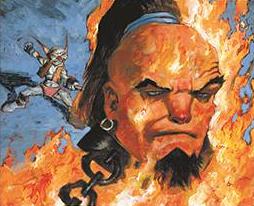 The true djinn is the largest of the djinn tribes. The Djinni are closely related to the efreets. A number of True Djinn have joined the two sides of the Spirit War, but most of them remain neutral. Many neutral djinn are still feral though, attacking anything in sight, which makes most people think they are evil nonetheless.

Due to their overwhelming numbers, the True Djinn are the most influential of their kind and control much of Rabiah and all of Wildfire. The majority of djinn are aligned with blue, draw their power off gold, and are vulnerable to copper and agate. Like all other Djinn they are capable of shapeshifting, but not with as much speed or treachery as the efreeti. They often live in windy and aerial regions, and many are able to fly either with natural or magical means. Below are the different tribes descended from the Rabiah Djinn.

The Aku Djinn were fierce and flesh-hungry, but nonetheless used by the people of Zhalfir as protectors of the city-tomb Aku. Although the flavor text of the card could be interpreted otherwise; the Aku Djinn never joined Kaervek and were in fact instrumental to his defeat.

The Erhnam Djinn are typically found prowling in forested areas, hunting lesser beings for amusement. Their love of the hunt is so great that they often use their own magic to make their prey better able to flee through the forests and therefore provide more of a challenge for the djinn. Their fondness of doing this often causes problems for a mage controlling an Erhnam Djinn, as the creatures it has empowered can use their newfound skills to attack the djinn's master. This often provides extra amusement for the djinn, who find entertainment in the suffering of people claiming to be its superior. A few Erhnam Djinns somehow made it to Otaria.

The Juzám Djinn are some of the most powerful djinn in Rabiah, second only to the Serendib Djinn. They can only be subdued with great difficulty and often rebel against their masters, inflicting great damage on the Sahir that attempts to control them.

The Serendib Djinn are the most powerful of the Rabian djinn. They are immensely strong and are closely related to the Serendib Efreets, but also cursed and exceedingly difficult to control. Although their most imposing quality is their strength as heavy elementals of air, the Serendib Djinn are also extremely intelligent and have the ability to grant wishes.

The efreets are the second most common and the most dangerous of the djinn tribes.

The benevolent djann are not necessarily constant friends of mankind, but they embrace light more than any other djinn. Djann are the eternal enemies of the efreets, nekrataals, and ghouls, and traditionally have defended those they find pure. Since they often visit desert oases, they were the first to come into contact with humans.

Caravan traders respect these powerful spirits, who can hide or reveal oases to those they deem worthy or unworthy. Djann often appear as white camels or soldiers, disappearing occasionally into sand cyclones. They tend to stay out of cities and roam the deserts, which brings them into conflict with the other desert-dwelling tribe, the ghoul. 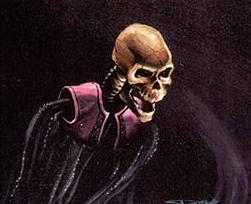 The only true Ghoul ever printed. Art by Douglas Shuler

Also known as ghul, the ghouls are the lowest order of djinn. They live in deserts, wastes, and shadowy areas of the Rabian cities. They draw power off the dead.

Despite being very intelligent, they are driven by instincts and act like wild animals when seeking food. Ghouls are highly superstitious and consider hospitality very important. Those ghouls offered salt will refuse to harm the giver and his household. Ghouls disguise themselves regularly as pilgrims or travelers, and attack their hosts if not shown the proper hospitality.

Ghouls prey upon individuals and small groups, attacking them openly. Fights between ghouls are common over the victim, and they will also seek out graves and eat the corpses when no other food presents itself. Powerful ghouls can shapeshift into vultures and follow lower ghouls to battlefields and dying travelers. Because they prey on those who cross the great sands of Rabiah, the ghouls are arch-enemies of the djann. Sahirs seeking to control ghouls will use Cat’s Eye talismans; however, the far more common approach against ghouls is for travelers of the Rabian deserts to bring iron with them.

Many creatures with ghoul in their name or even in their creature type have been printed, but only Khabál Ghoul is a ghoul of the djinn tribes. In the Arabian Nights expansion Wizards of the Coast used the term "Ghoul" like it is used in Arabian tradition, but after that set they have been using "Ghoul" like it is used in the western tradition. While in Arabian tradition a ghoul is indeed a wandering spirit, in the West the term is largely synonymous with Zombie. 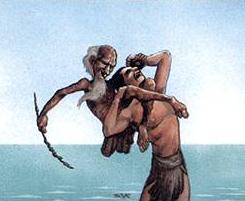 The only Marid ever printed. Art by Susan van Camp

The marids are the oldest tribe of djinn and the most respected. Although they are isolated and few in number, these spirits are the most powerful of the djinn tribes. There is a legend that one of the marid was the first djinn of Rabiah and that all others came from him.

Masters of weather, wind, and water, the marids tend to live near the coast and travel in great waterspouts. Most of the marids have left the mortal plane, choosing to abstain from the holy war between the rival djinn tribes. Those that have remained draw their earthly power from water. Marids often appear as old men, porpoises, or horses, leading travelers to wise courses.

Copper, iron, and jade are all talismans used against marids. In the Grand Creature Type Update the subtype Marid (Old Man of the Sea) was changed to Djinn. 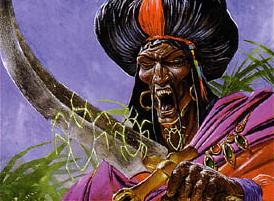 The only Nekrataal ever printed. Art by Adrian Smith

The Nekrataal are the second oldest of the djinn tribes, and have the greatest lifespans. Living in swampy and magmatic regions, the Nekrataal are devoted to bringing plague and despair to the land. They are known to ride or become black camels, although they are more famous for appearing as beautiful men and women. As they are physically weaker than most other djinn, the Nekrataal use trickery and manipulation to accomplish their goals.

Pure Ravnican Djinn are tremendously powerful and in fact deemed too dangerous to exist according to the Guildpact. Around the time of the Decamillennial the few pure Ravnican Djinn still alive have become forced laborers in the polar regions. Human/Djinni hybrids with far lesser powers are employed by the Izzet.

The Jeskai Way of Tarkir features Djinni and Efreet. These seem to be less spirit-like, because they sometimes appear as zombies.

The Emberwilde Djinn are ruled by the Emberwilde Caliph and are themselves the rulers of the fire-based plane of Wildfire. They also have much influence in the Jamuraan nation of Suq'Ata, since there are natural portals between the two of them.