From MTG Wiki
(Redirected from Dice)
Jump to: navigation, search

“Die” redirects here. For the process of putting a creature in the graveyard from the battlefield, see Dies.

Dice rolling is a mechanic that creates a random effect in game play. It is momentarily not part of the official Magic rules for the regular game, but has been used in supplemental sets and was considered for Battle for Zendikar.[1][2]

The rolling of a regular six-sided die as a mechanic was used on Magic cards in Unglued, and proved to be unpopular.[3][4] Ever since, bringing six-sided dice to black border is something R&D has consciously chosen not to do.[5]

on one face, the chaos symbol

on another and four blank faces.[6]

In a Planechase game, the active player can roll the planar die as a special action any time they could cast a sorcery. The first roll per turn costs

Fractured Powerstone is a card that allows to roll the planar die. It is also the only black-bordered card which refers to rolling a die.

Chaos Ability
An ability of a plane card that triggers “Whenever you roll {CHAOS}” on the planar die in the Planechase casual variant. See rule 309.7.

One of the mechanics that was considered for the Eldrazi in Battle for Zendikar was hedronize. Hedronize was a keyword action where the player rolled an hedron-shaped (eight-sided) die to get an effect. Thus, hedronize had eight abilities – you roll a dice and you do one of eight things (gain life, produce a spawn, etc.). The rules card that would have come in the pack would list them. The mechanic didn’t really play well because it was a little too chaotic.[7][8][9] Nonetheless, there were 8-sided Hedron dice given out at PAX.[10] 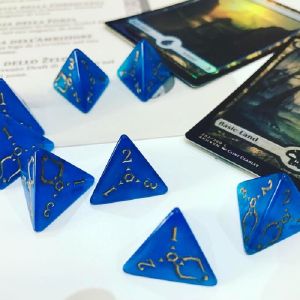 Players who attended Amonkhet prerelease were rewarded pyramid-shaped (four-sided) "lazotep" dice for each trial they completed. These were also awarded in the Magic League. The dice (or counters) could be used to keep track of -1/-1 counter on their cards.[11]

Sword of Dungeons & Dragons from Unstable makes a cross-over with Dungeons & Dragons and uses a D20 (twenty-sided die). Other cards again used dice rolling with regular dice. Mark Rosewater had reevaluated dice rolling and had decided that it could be popular if R&D was careful about how the cards were designed.[12][13] In Unstable, blue manipulates dice. Black magnifies dice. Red rolls the most dice. And green cares about what is rolled. White has a little dice rolling but doesn’t mechanically interact with it. What colors you draft affects how you may interact with dice rolling.[14]

Dice rolling was also used in Unsanctioned.[15] In addition, Pippa, Duchess of Dice creates green Die creature tokens with power and toughness each equal to the result of a die roll.