From MTG Wiki
(Redirected from Development)
Jump to: navigation, search

R&D is an abbreviation for Research & Design, formerly Research & Development. It is the section of Wizards of the Coast that creates upcoming sets and cards for Magic: The Gathering.

There are several teams within R&D. Design creates the vision, while development upholds that vision even if it has to make some changes to get it there.[1] The design/development split is a very important facet to Wizards R&D. It ensures that each set has two different set of eyes overlooking each decision to make sure that what we end up with is the best the set can be.[2][3] Other teams in Magic R&D are creative, editing and digital. Despite the R in R&D, there is no research team.[4]

From the release of Magic 2014 until Dominaria, design and development teams were officially referred to as "Initial Concept and Game Design" and "Final Game Design and Development" teams, respectively. Although these names had previously been in use at Wizards of the Coast internally, the announcement for M14 was the first to use them in public.[5] Starting with Dominaria they were officially referred to as Vision Design and Set Design, with the added Play Design team.

In 2018, Wizards of the Coast went through a reorganization. They shifted to what is known as a studio model, where teams are built around supporting a particular product. The section known as R&D along with a few other sections of the company (including art, design, and production) were combined to become the studio for tabletop Magic.[6] There are different studios associated with other aspects of Magic, such as Digital Games and Franchise. 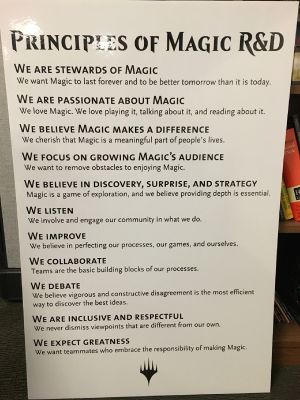 As posted in job advertisements, R&D upholds the following principles:

It takes about two years from start to finish to make a Magic set, and a set is finalized by R&D six to eight months prior to release.[8][9][10] The creation process moves through several steps on the way to a final product. These steps are not strictly sequential, and overlap.[11]

The designers create new cards, mechanics, and themes for Magic sets. Every set should do something innovative that hasn't been done before. It also should bring back something from the past and present it in a new light, it should add new elements to old ideas.

Starting with the Dominaria set, the design team was rebranded as Vision Design, with a shortened and more creative focused task.[12]

At its essence, design is responsible for vision, and development for execution.[13][14] Many think that development's job is to just tweak numbers and correctly cost things, but the main job for developers is to make Magic as fun as it can be for all the different types of players.[15] Most of the time is spent working on game-play design to ensure the play experience is as good as it can possibly be.[16][17] This means that the mechanics and themes and overall feel of a design file should express themselves satisfyingly when actual games are played. The developers try to find the most fun parts of the design and bring them to the forefront of the set, and kill unwanted elements.[18][19][20] Casting costs and other balance issues for both Limited and Constructed are still considered.[3] To assess the strength of a card or card set, development uses a process called "pointing".[21][22][23][24]

One of the most important parts to developing sets today is to create cross-block synergies so the sets within Standard play well with each other, but also so that there is enough of a change when Standard rotates to change things up. A diverse and shifting metagame is a healthy metagame.[25] After structural development, there is format development. By the time format development begins, most of the previous set is locked down, and the new set has to integrate with it for both Limited and Constructed.[26]

Development has many interactions with the other teams within Magic R&D, but also with Brand (the people in charge of marketing, advertising, products, the website, and Organized Play).[27]

Starting with the Dominaria set, the development team was rebranded as Set Design, with an extended task to take the design from a set from concept all the way to finished product.[12]

The Product Architecture or product design team was created in 2017. Led by Mark Globus, it tries to create a cohesive message and goal in the wide range of Magic sets and releases.[28] Other members are Gavin Verhey, Mark Heggen and Mike Turian.[29][30]

The R&D Narrative Team team begins work on the card's creative elements once the card is in its near-final state (ideally).[31]

At the very beginning of the creative process there is a concept push of world-building, where a specially picked team of Magic artists are flown in for a couple of weeks to generate sketches and ideas for what a brand new world looks like.[33][34] This results in a style guide [35][36]

The creative team also contributes to articles (Uncharted Realms), webcomics, player guides and the occasional book.[37] As off 2016, the team who oversee all things Vorthos is:

In 2018, Nic Kelman became the Entertainment Designer, the overall manager of the team. Acknowledged writers like Martha Wells, Kate Elliott, and Cassandra Khaw were hired to create content for Magic Story.[38]

While design is going on, the editing team of Del Laugel has a check-in with the rules manager to make sure that what they are doing things that will work. The team is constantly monitoring the card file as it goes along. They start editing it usually at some point during development. And even in design sometimes they’ll make notes on general wordings. Then futher in development, templating starts. Each set has a lead editor. Together with the rules manager (who may be the same person) and the development lead, they try to figure out how the cards have to read. Editing also involves writing reminder text.[32] Furthermore, it is Editing’s job to make sure the art comes in and the names and flavor text get done, and takes care of collector numbers and other information below the text box. After the cards are physically laid out by the CAPS team (Creative and Professional Services), Editting gives the final go ahead to create the print sheets.

The team is also responsible for the full editing and proofing of Magic packaging, inserts, rules materials, and other ancillary items. Since 2018, they are combined wtih the Rules Manager and the Graphic designers in the Delta Team.[39]

Since 2019, the teams are built around products rather than services.[41]