Deckmasters 2001 is a box set that was released in December 2001. Richard Garfield and Jon Finkel were tasked with designing decks to pit against each other.

The card pool was Ice Age and Alliances, and the reprint policy had to be taken in account. Each could only use four rare cards in the deck, and no more than two copies of any one card. Color hosers were not permitted. The resulting decks are showcased in this set.

Obviously meant to be a series[2], referring to the Deckmaster brand, a follow-up set has never been published.

In the actual match, Finkel beat Garfield 2-0.[3][4][5] The first game was fairly even and was lost due to Garfield making a number of mistakes based on rules that had changed since he invented the game; game 2 wasn’t even close. 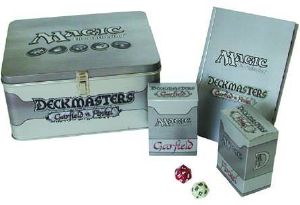 The contents of the box set are: 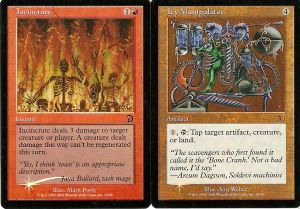 The four premium cards in the box set are:

Garfield is a red / green deck. Drop creatures as fast as you can, and use the red spells to clear the way for them to attack. Most of the creatures in the deck have such a high toughness that red burn spells won't kill them.

1 Folk of the Pines

1 Bounty of the Hunt

Finkel is a black / red deck. The deck starts by summoning efficient, versatile and hard-to-neutralize creatures. Clear a path with spot removal, and finish by hurling great balls of fire at the opponent. Use the Necropotence whenever you can.

The rares in this deck are Balduvian Horde, Necropotence, Sulfurous Springs and Underground River.