Deathtouch is a static ability that causes damage dealt by an object to be especially effective against creatures. 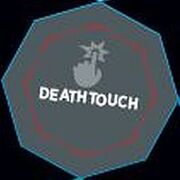 Similar abilities to deathtouch, always triggered, had been spelled out on earlier creatures, the earliest being Thicket Basilisk from Alpha, hence R&D's pre-keyword name for the ability being "basilisk".[1] The keyword was introduced in Future Sight, as a preview for Lorwyn, in which it featured more prominently.[2] Technically, it gained evergreen status with Tenth Edition but was first featured in a core set with Magic 2010.[3] At the time of keywording it was still a triggered keyword ability; it changed to its current status as a static ability associated with a new state-based action and new damage assignment rules with Magic 2010.

This ability was primary in both black and green for a while. Its now secondary in green, because R&D found that black both had more need for it and had more flavorful ways to express it creatively.[4] Now that deathtouch is keyworded, R&D no longer creates variants.[5]

Deathtouch
A keyword ability that causes damage dealt by an object to be especially effective. See rule 702.2, “Deathtouch.”

Creature — Ooze
2/2
Deathtouch (Any amount of damage this deals to a creature is enough to destroy it.)
When Acidic Slime enters the battlefield, destroy target artifact, enchantment, or land.