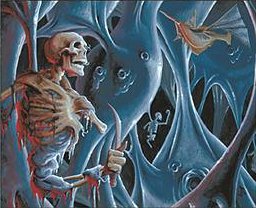 The Death Pits of Rath. Art by Joel Biske.

What no one realized is that when living beings are dissolved in the black substance, their memories and life-forces are also absorbed. As a result, these Death Pits have developed a primitive predatory consciousness, and a cruel playfulness toward prey. Taking indigestible bones, armor, weapons, and any other leftovers, the Death Pits recombine these bits and pieces into undead-like puppets known as Carrionettes. Manipulating these "bodies" through long tendrils, it attacks intruders via swordplay, hand-to-hand combat, and other strangely mimetic ways. Once the victims are subdued, the Carrionettes grab on and take them back to the main body of ooze. If this thin tendril is cut in battle, the reanimated corpse collapses into a black, watery mess.