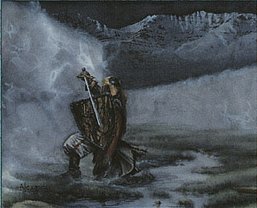 The Dark Mazes are an inexplicable phenomenon, their origin and habits unknown to any scholar. They are a misty maze of simple twists and turns that any creature can discover and follow, a place that thinks and hunts like a creature. The real danger is the horrible truth that lies at their center. After cold foggy nights, villagers of the Dark Barony will often find the corpses of loved ones in the marsh-fields, torn to pieces and bones splintered, no trace of what had killed them.

A number of these creatures were created years ago on the Floating Island by the son of an Aysen bureaucrat who was heavily advocating a full scale assault against the Dark Barony. The young man had been given "special books" by a mysterious stranger and when he summoned them, he was destroyed by the very creatures he'd created. The message to his father was clear.

The maze-elementals have since been at large, though they seem to frequent the area around Castle Sengir.[1]