Dark Ascension is the second set in the Innistrad block. It is the 57th Magic expansion and was released on February 3, 2012.[2]

Dark Ascension, like its predecessor, is top-down designed with a horror theme.[3] The set contains 158 cards (64 Common, 44 Uncommon, 38 Rare, 12 Mythic) and includes randomly inserted premium versions of all cards in the set. The set puts a stronger emphasis on tribal creature types, such as providing a lord for each of the main types (vampires, ghosts, werewolves, zombies and humans).[4][5] All the major mechanics of the previous set, including Double-faced cards, return. New mechanics are Fateful Hour and Undying.The expansion symbol of the set is the Innistrad symbol "turned inward", which represents humanity hunkering down.[6]

Innistrad has been overrun by creatures of the night. While the forces of good struggle to hold back the threat, villagers cower behind walls and pray for the morning light. The humans are on the verge of extinction and have to take desperate measures to stem the tide.[7][8][9] It is revealed that Avacyn, the guardian angel created by Sorin is locked in the Helvault.[10][11][12][13] 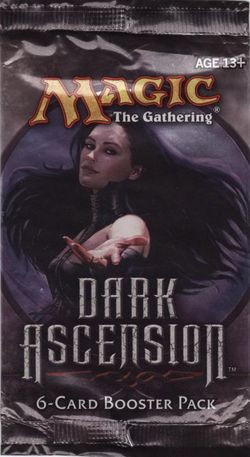 At each prerelease, some number of people were designated by some flashy stickers as a vampire, werewolf, zombie, or spirit at the start of the event. Any time a monster defeated a human in a match, the monster would convert the human to his or her cause. At the end of each Prerelease, the remaining humans and the largest tribe or tribles of monsters would be declared winners, but the rewards were up to the organizers.[17] The prerelease cards was the double faced Ravenous Demon / Archdemon of Greed.[18] The Release card was Mondronen Shaman / Tovolar's Magehunter.[19] The promotional card at the Game Day event was a full-art Strangleroot Geist, while a full-art foil Zombie Apocalypse was given to the top-8 participants. The Buy-a-Box was Gravecrawler.

Regular boosters of Dark Ascension come with a bonus sixteenth card that is either a Dark Ascension checklist card, a creature token, an emblem or a rules card with an advertisement on the reverse side. 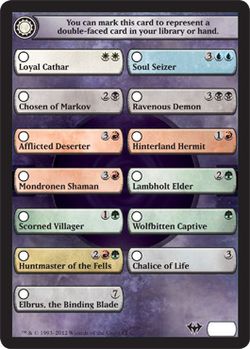 The new Dark Ascension tokens and emblem are:[20]

The set introduces a new keyword mechanic in Undying. It functions very similar to Persist, but instead of a -1/-1 counter, it adds a +1/+1 counter to the creature when it returns from the grave.[21][22]

Fateful hour is a new ability word, which creates an ability that functions if the controller of the effect is at 5 life or less.[23][24]

Double-faced cards return with this set, further showcasing the transformation mechanic. As for Innistrad a special Checklist card is provided to facilitate play with the double-face cards.[25][26] Flashback, Morbid, and Curses also return.

Dark Ascension breaks the mold for cycles to a certain extent, as some of the cycles only contain four cards. In cycles which emphasize an allied color-pair, the green-white part of the cycle is missing. This is likely due to the higher emphasis on monster tribes, as the white/green pair is tied to humans.