Daretti is a goblin planeswalker from the plane of Fiora. He was the master and suspected murder victim of the artificer Muzzio.[1]

He is a master artificer skilled at finding treasure where others see only trash, inquisition and discovery pervading his scientific efforts. 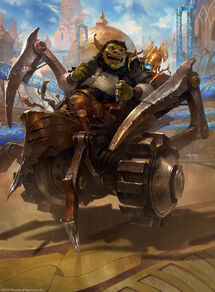 Daretti was a goblin artificer of surprising intellect, talent, and ambition. From an early age, his goal in life was both simple and audacious: to become a master artificer at the Academy in the High City of Paliano. He rose through the ranks, evoking the gossip of the city’s mage elite. Soon gossip turned to irritation, and later, to outright disdain. While Fiora is a plane of cunning and shadowy games, it was not their plotting that led to his downfall, but a malfunction of Daretti’s own experiments.

One of Daretti's cogwork constructs exploded, apparently killing him. The explosion ignited Daretti's Planeswalker's spark, and he planeswalked to relative safety. Although he escaped with his life, the accident was not without cost, leaving Daretti without the use of his legs. As a true artificer, he built himself an elaborate cogwork rig that assisted him in movement and in continuing his experiments in artifice, both on Fiora and beyond, for he has much to learn from the other worlds of knowledge that are now open to him.[2]

When Marchesa was crowned queen of Paliano after Brago had been assassinated by the planeswalker Kaya, Daretti allied with several disenfranchised goblins under the leadership of Grenzo, former dungeon warden, to take revenge on those that had wronged them. His schemings were responsible for the disbanding of the Academy, as he tipped Grenzo, the palace's goblin prison warden, off to Muzzio's storehouse of cogwork warriors. He was also instrumental in instigating the goblin riots, both to overturn Paliano's current leadership and to root out former members of the Academy who are now lying low in the city. Together with Grenzo, he raided the home of Professor Fimarell, gathering his books to burn them. When they were intercepted by the city guards, Daretti discovered that the professor had plagiarized some of his designs. After killing Fimarell, he and the other goblins turned their attention to other former academy members that had opposed him and have now fallen in league with the new Queen.[3]

Darreti had a planeswalker card in War of the Spark vision design, but R&D ended up having too many red planeswalkers to do them all.[5]