From MTG Wiki
(Redirected from Daghatar)
Jump to: navigation, search 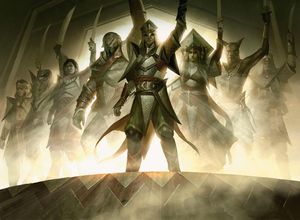 One of the five Clans of Tarkir, the Abzan clan admires the ancient dragons' aspect of endurance.[1] Their color wedge is

The Abzan Houses are resilient warriors that fight in tight-knit groups. Their homes are on the harsh, rugged desert plains.[4] The center of the clan is the fortress city Arashin.[5][6] Shu Yun regarded them as the promoters of stability and peace, who protected the trade routes between the clans.[7]

The Abzan Houses model themselves after familial units to survive their harsh environment. Family as a concept is of extreme relevance to the Abzan, believing it to be the institution that allows them to thrive in the harsh desert environment. As such, a great cultural emphasis is placed on familial bonds and duty; referring to another clan member as "sister" or "brother" is a mark of high esteem, while ritual disowning is a grave matter, both parties throwing their blood into a fire.[8] Disowning is a grave matter, as not only are the disowned social outcasts (though open to more life paths, such as wandering, adventuring or becoming mercenaries) that cannot be adopted by any family, they also lack a kin-tree, and their spirits become malevolent and restless after death. Each Abzan family bears a kin-tree, a sacred fruit-bearing tree to which the dead members of the family are fed and where their names are carved, zealously guarded by the firstborn child, known as a "tree warden/caretaker"; younger children are free to choose other paths, and eventually plant their own kin-trees and families. The spirits of the ancestors can be summoned from these kin-trees, and the Abzan carry/consume resin, sap or amber in order to connect with the spirits.

Adoption is possible and common within the Abzan, not only within the Abzan Houses, but also from other clans. After decimating their enemies, the Abzan take in the orphans and adopt them as their own, these orphans being known as Krumar. Many orcs have entered the Abzan this way.

The Abzan are severely distrustful of outsiders, except for the Ainok, the original inhabitants of the desert, which have taught the clan how to survive in the inhospitable environment.

The Abzan are adept war strategists, relying on disciplined troops, massive fortifications and ample resources. They often forego chasing after the losing enemies in order to maintain strategic ground, but have learned to exploit the desert to their advantage, often leading enemies into the shifting sands to finish their opponents without lifting a finger.

While the Abzan Houses look like a unified entity, in reality they are a web of families competing politically, trying to form alliances while isolating rivals. That said, they are all too aware that disunity is to be avoided at all costs if they wish to survive.

After Sarkhan Vol saved Ugin's life and sent the dragon into a deep slumber a thousand years before the present day, the dragon storms of Tarkir increased in intensity, generating the highest number of dragons the plane had ever seen. Dromoka and her brood thus laid a systematic genocide on the Abzan, to the point of utter desperation. Daghatar, consulting the amber relic known as Remembrance - the last remnants of the first kin-tree, holding the spirits of the first ancestors -, decided to hold an audience with Dromoka, hoping to kill her in a moment of vulnerability, and save his clan henceforth.

Instead, he learned of the reasons as to why Dromoka massacred his people. The dragons saw this as an affront to life and the natural order, and though they admired the compassion and tenacity of the Abzan themselves, they could not help but kill the Abzan. Seeing no other option, he ignored the dictates of the Remembrance spirits and shattered the relic, pleasing the dragon. To further solidify this, he ordered the end of all kin-trees and spirit ancestor practices, the very heart of Abzan traditions, thus forging a pact with the dragon.[9]

The clan as a whole seemed to have been abolished, Dromoka forbidding the very use of "clan" and "khan", with the people living under her having no formal name of their own. "True" Abzan kept holding their ground, under the khan Reyhan, until the latter went to consult with the khans of the other tribes. Ojutai, Silumgar and their broods attacked the meeting, killing her and thus the last chance of the "true" Abzan to survive, leaving Daghatar and the others under Dromoka as the sole survivors.[7]

These remnants later formed a new Clan, under the leadership of dragonlord Dromoka. However, the practice of ancestor worship persisted in secret, despite repercussions from the dragons.

Abzan cards, with the focus on the clan's aspect of Endurance, were announced to feature tough creatures and control elements as well as a clan-specific mechanic that help you win the long game.[4] This was later revealed to be Outlast, an ability that allows creatures to pay mana and tap to place +1/+1 counters on themselves, with other cards triggering from outlast activations. In Fate Reforged the Abzan House featured Bolster, instead.[10] This mechanic puts +1/+1 counters on the creature with the least toughness.

The following is a comprehensive list of races and classes found in the Abzan Houses:[12]

Relationship with the Dragons[edit | edit source]

Dromoka's Brood, the dragons named after their female champion, were revered by the proto-Abzan Houses for their endurance. They were robust, Ankylosaurus-like beasts, well-protected by scaly armour, that breathed beams of light. The brood was drawn to Tarkir's hot, sunlit deserts.[13] The Abzan faced these dragons by forming impenetrable defenses and wearing their attackers down.

The Abzan Houses are loosely based on the Ottoman Turks.[14]