The Cult of Rakdos is the black/red guild from the plane and city of Ravnica. Introduced in Dissension,[2][3] the guild is also featured in Return to Ravnica and Ravnica Allegiance. 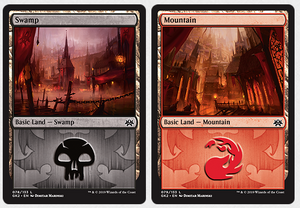 Founded by parun Rakdos, an ancient demon, the Cult of Rakdos attend to menial labor and the services industry, which includes some less-than-savory offerings, such as assassination, as well as more agreeable ones, such as the catering (i.e., food service) and entertainment industries.[4] Members of the demon-worshipping guild are referred to as cultists.[4]

Like extreme utilitarians or hedonists, the Cult of Rakdos are a guild that places a premium on personal pleasure, or "fun", even if it cruelly causes pain and suffering to others and themselves.[5] Some of the crueler, more evil, and more sadistic members of the Cult directly and intentionally inflict pain on others.[6] Other than being a guild of miscreants, the Cult of Rakdos does have a civic function in Ravnican society per the Guildpact; some members work as manual laborers and even slaves, and the guild overall has a niche as Ravnica's entertainment industry, such as clubs.[6]

Rakdos is the undisputed center of attention of the Cult when he is awake;[7] when the demon is hibernating, however, there is an acting guildmaster.[8] At the time of the Decamillennial, the acting guildmaster was the human sorceress Izolda (or Lyzolda).

The Bloodwitches are a cadre of powerful witches who reside in Rix Maadi and are the closest thing to advisors Rakdos has.[6] Most of the political maneuvering that happens in the Rakdos cult happens among these witches, most of whom are female. Rakdos prizes chaos and cruelty, so the bloodwitches cultivate these qualities while downplaying their own aspirations for power and privilege. Exava currently wields the most power, although she has to work hard to keep it. Other known bloodwitches are Lyzolda (Izolda) and Hekara.

Formally, the guild has no structure, and is not organized; however, members used to be affiliated with loose groups referred to as "rings", each of which was led by a ringmaster and with its own sphere of influence, commodities, and cult followers.[6] There were nine major Rings of Rakdos. The Rings had territories based around the physical locations of their clubs, and they enforced their control over these territories with violence when necessary. Each Ringmaster employed spiker gangs to handle any violence — whether it was controlling it or instigating it.

Riot Mages lead Rakdos festivals.[6] These festivals are dearly loved by Rakdos members and hated by the general public, who are left to clean up the rubble and hold the funerals afterwards. Rakdos festivals are not only a reward to cult members, but also a pretense for Rakdos thieves to steal anything they can get their hands on while the residents are distracted.

As the Orzhov have bought up more and more of the city's profit center, the rings have given way to troupes, informal casts of fanatical stage performers. The Cult's performances range from satire and mocking the leaders in their shows to having special shows that end with the killing of the individual.[9]

The Rakdos have a reputation for unleashing monstrous horrors onto the streets of Ravnica, and the uncagers are their wranglers. They sometimes work with the performers to provide animals or monsters to participate in performances, but they also do the bidding of the Bloodwitches of Rakdos himself.[9] 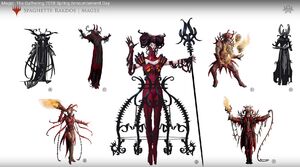 The Rakdos as featured in Ravnica Allegiance

At the time of the Decamillennial Celebration, the acting guildmaster, human bloodwitch Izolda, procured spinal fluid from a dragon, blood from Jarad, and blood from Jarad's son Myc to rouse Rakdos from his sleep. Rakdos awakened and wreaked havoc in the streets of Ravnica until the demon crossed the path of Project Kraj. After Project Kraj absorbed Rakdos into its body, sustaining injuries, the comatose Rakdos was thrown back into his lava pit, Rix Maadi, by the Boros angel Feather, uncertain of his return.[10]

Sensing her weakness after the defeat of their demonic guildmaster, Izolda's followers summarily devoured her alive.

Rakdos is still alive, and the guild has transformed from an orgiastic cult into a roving band of hedonistic, anything-goes, circus entertainers.[9] The Cult has no interest in seeing another megalomaniac tyrant gain supreme power over Ravnica. Their greatest fear is that some other guild might gain enough power to impose its own set of values on everyone. For this reason they destabilize authority by mocking and undermining the other guilds and their leaders ("Ridicule the powerful, empower the ridiculous").

In the War of the Spark, Rakdos initially was not cooperating at all with the anti-Bolas efforts because Hekara, his emissary, was killed.[11] Kaya's group was going around to every non-cooperating guild to convince them to help out in Niv-Mizzet's plan of becoming the new guildpact. Rakdos still refused to cooperate with the plan, but Hekara's corpse was brought back by Tomik and she was revived as a bloodwitch. Hekara said that she would help Kaya's group. Exava tried to object but lost to Hekara in a fight. Rakdos didn't say anything but did not actively prevent Hekara from leaving.

Later he was Gideon Jura's Unlikely Aid when they attacked Nicol Bolas together. He was knocked out of the air by Bolas when Gideon was riding him.[11] He was fine and at the end of the War, making preparations to "lighten the Ravnican people's hearts" and help them forget the horrors of the war with the performances of the Rakdos circus.

In developing the identity of the Cult of Rakdos, Aaron Forsythe noted that the Cult of Rakdos revolves around the destruction of everything, with exception to enchantments, a permanent type that neither Black nor Red can deal with.[12] In addition to this, the guild was conceived as one that wanted to hastily play out its hand, and was willing to sacrifice creatures for beneficial effects for itself and detrimental ones for opponents.

On the combination of Black and Red, design team member and Head Magic Designer Mark Rosewater explained that the combination is the synthesis of Red's desire to do as it pleases; disregard for laws, morality, and order; and broad spectrum of emotions and Black's self-centered nature and selfishness.[13] These philosophies are translated into gameplay as aggression and removal.[14] That notwithstanding, Mark Rosewater has stated that, while the Cult of Rakdos certainly contains a vast number of "hedonists", particularly in card form, there are individuals that are comparably (more) civil.[15]

This more civil aspect of the Cult is built upon in the official Magic Story "Life in the Ring", where the Rakdos performer Rinni explains to the Guildless urchin Lunicia that not only does the Cult perform a vital role by keeping Rakdos quiescent, but there is a deeper philosophy to what they do: the Cult's hedonism, and willingness to risk their lives in its pursuit, is an acceptance of death's inevitability and an embrace of the precious gift of life they have been given - as well as a reminder to others that life is both fleeting and precious, and thus should be treated as the gift that it is, no matter how harsh or short it may be.

During Return to Ravnica development, one ability considered for the in-game Cult of Rakdos was Paincast, an ability that reduced the cost of spells for each point of life lost by an opponent during the current turn. According to Magic Head Designer Mark Rosewater, it was deemed that the ability created "warped game play";[16] and, a more combat-relevant ability, Unleash, replaced it.[17] A form of Paincast would appear on Rakdos, Lord of Riots, who can grant it to all creature cards you cast that turn.

Prior to the official release of Return to Ravnica, Unleash received a poor or mixed reception from players, with some failing to appreciate its complexity and freedom of choice;[18] but, at the prerelease and upon release of the expansion, the mechanic gained more favor, particularly in the Limited format play.

Spectacle is a keyword ability that gives spells an alternative cost. You can cast a spell for its spectacle cost if an opponent lost life during the turn.

Species and races associated with the Cult of Rakdos include:

Classes associated with the Cult of Rakdos include: