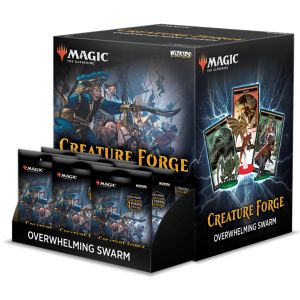 Magic: The Gathering Creature Forge is a series of Magic token creatures come to life in a miniatures release by WizKids. The inaugural set was released on September 19, 2018.[1] The token figures are sculpted in scale with WizKids’ D&D minis line.[2]

Each token comes with a base that represents one of the five iconic colors of the Color Wheel. Mainstays like artifacts and multicolored creatures can also be found in the set, each with its own unique corresponding colored base (grey and yellow/gold respectively). Game stats are also shown on the base, making these tokens perfect for both play and display.