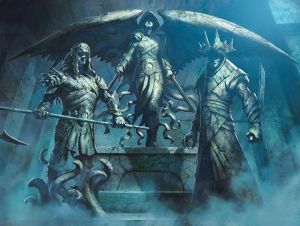 Cosi, the trickster god, is the Zendikar Merfolk deity of the realms of land and earth. He is known as Talib by the Kor and is their god of the earth, the body of the world. Both deities are male and actually come from the same source: long lost memories of the terrible Eldrazi Kozilek.

Regular merfolk never layed offerings at the feet Cosi's statues, calling him the forbidden god. However, he was worshiped in secret by children and the elusive Tricksters who were willing to break normal rules for the benefit of the tribe.