Core sets (stylized as Core Set) form the base set of cards for tournament play and rotations.[1][2] After Limited Edition in 1993, all core sets through Tenth Edition consisted solely of reprinted cards. As of Magic 2010, they feature new cards alongside reprints. Core sets were discontinued in 2015, but were reintroduced in 2018.[3] 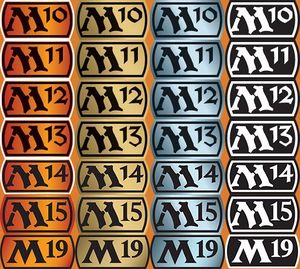 Up to Eighth Edition core sets were referred to as base sets or basic sets.[4] However, a base set was broader defined, because the Fourth Edition base set included the Chronicles extension. The name change came into being because there were concerns that older base sets confused newer players—their primary audience—by making them feel like they "missed out" on five or six previous editions and were hopelessly behind.[5]

Fifth Edition was the first core set to implement expansion symbols on its cards (though only on the Simplified Chinese printing), implementing a roman numeral style logo, which appeared in all languages starting with Sixth Edition. The later core set expansion symbol style (the stylized 'M' from the Magic logo and an abbreviation of the set year number) was introduced with Magic 2010. Core sets were printed with white borders from Unlimited Edition through Ninth Edition, but a Tenth Edition poll resulted in that set's cards being printed with black borders, a trend that continued with all subsequent sets. Foil cards were black-bordered beginning from their core-set introduction in Seventh Edition.

Core sets were discontinued after Magic Origins in 2015, but were reintroduced in 2018. Like the sets from Magic 2010 to Magic Origins, these sets contain a mix of new and reprinted cards. However, they are geared primarily toward incoming players.[3][8][9] They have a strong integration with the welcome decks, planeswalker decks and Deck Builder's Toolkit, allowing for an easier transition between the products.[3] These core sets do go through exploratory or vision design.[10]

Core sets may be distinguished from expansion sets by the addition of reminder text on cards, so as to elucidate abilities and mechanics that are unfamiliar or initially incomprehensible to newer players, such as first strike, flying, haste, protection, regeneration, and trample.[11]

Most core sets do not have a unified storyline among cards. Cards' flavor text may nevertheless refer to expansion sets and their settings or even real-world people, texts, or things (e.g., the Fifth Edition Boomerang and the Seventh Edition Boomerang). Two sets are an exception to this:

Core sets were often seeded with cards that reinforced the themes of upcoming blocks, or used to provide answers to cards that were more powerful than was anticipated in the year preceding it. The last goal of core sets was to play well with the block that was leaving Standard, while not relying so heavily on it that the cards would not work after rotation.[12]