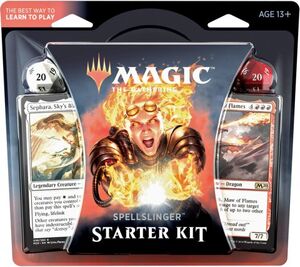 The Spellslinger Starter Kit is a learn-to-play product aimed at new players, including instructional materials that guide two players through their first game. It was sold in local game stores and mass market stores.

Unlike its previous installment (which was released on the same day as Guilds of Ravnica, but had no obvious connection to that set), this Starter Kit is marketed as part of the Core Set 2020 release.[2] They are now mono-color decks, and the two face cards are given the foil treatment.

The rares in this deck are Drakuseth, Maw of Flames (foil), Glint-Horn Buccaneer, Immortal Phoenix, Leyline of Combustion, and Shivan Dragon. 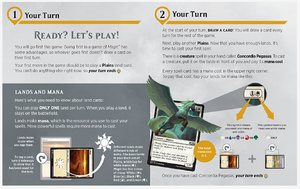