Contraption is an artifact subtype introduced in Future Sight with Steamflogger Boss, and expanded upon in Unstable.[1][2][3]

To remind you that they shouldn't be put into your regular deck, Contraption cards have a unique card back.[1] 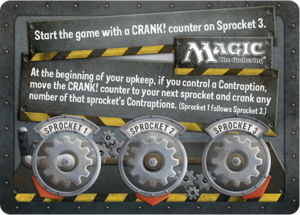 If one of the Contraptions would go to the graveyard, it's placed into the scrapyard instead, a special zone reserved for broken Contraptions.

Contraptions have a watermark placed in the bottom right-hand corner to show which Unstable faction they belong to.[1] They are borderless, so they could potentially be used in black border one day.[4] However, because of the different card back, they are currently not Legacy legal.[5][6]

It was stated by Aaron Forsythe that Contraptions were meant as a joke.[7] His statement ensured that players wanted it and they bugged Mark Rosewater about it ever since. Thus, Rosewater vowed to figure out contraptions' design before he would retire.[8]

Kaladesh seemingly fitted the right circumstances for contraptions, but Rosewater argued against it.[9][10] Contraptions finally got done properly in Unstable, as revealed by Mark Rosewater at SDCC 2017.[11] The design of Unstable predated Kaladesh.