Magic: The Gathering – Conspiracy is the first-ever multiplayer-focused Magic booster set. It was released on June 6, 2014. Conspiracy is designed to be drafted.[2][3][4][5]

Conspiracy contains 210 cards (80 Commons, 60 Uncommons, 35 Rares, 10 Mythic Rares and 25 draft-related cards in the land slot,[6]); 65 are new cards with new mechanics that enhance multiplayer play. Returning favorites from throughout Magic 's history round out the set and cultivate an environment of deception and treachery. The Conspiracy set is designed to be drafted with six to eight players who then split into groups of three or four players for free-for-all multiplayer games.[7] The expansion symbol is a seal on a scroll.

Each Conspiracy pack has one "draft matters" card which is in the pack in lieu of a basic land.

Conspiracy was not released on Magic Online, but certain cards from the set were made available in Vintage Masters. There are sixty-five new cards in Conspiracy. Fifty-two of the new cards are legal in Legacy and Vintage; thirteen cards with the new Conspiracy card type are not.[8] These 13 Conspiracies and 12 draft affecting cards take the place of the normal basic land in a booster. The set features a planeswalker card for Dack Fayden.[9]

All new cards in Conspiracy depict the environment of Paliano, the High City on the plane of Fiora, which is the home of Dack Fayden in the Magic comic books published by IDW.[7] Some of the reprints received new artwork, but were set on other planes.[10][11]

A preview card (Magister of Worth) was hidden in a Born of the Gods prerelease pack, which had a serial number printed on it, itself leading to a voice message that turned out to be a cipher for another card's information (Cogwork Librarian).[12] The official announcement was made on February 13 and was also ciphered,[13] with a version in cleartext posted the next day.[2] 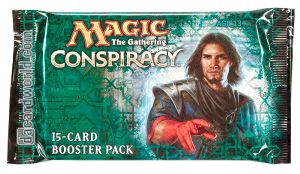 Conspiracy was the first set to feature horizontal art on the booster packs since Unglued. They have artwork from one of the cards: Dack Fayden, Magister of Worth and Scourge of the Throne.

Conspiracy has eight tokens and one emblem.[15]

The set introduces ability words Will of the council and Parley.[16] Will of the Council allows the effect of cards to be decided by popular vote, with other cards giving players the ability to vote multiple times. Parley on the other hand has each player reveal the top card of his or her library, then draw that card, with an additional effect for the player who used the Parley card that scales based on the number of nonland cards revealed this way.[17] A new keyword called Dethrone is also in the set, giving creatures additional +1/+1 counters if they attack the player with the highest life total.[18]

The set further introduces the new Conspiracy card type. These cards are of normal size with a regular card back, but can not be played in a deck as they have no casting cost. Instead these cards are placed in the Command zone at the beginning of the game and have their effects there. Some of these cards have the keyword Hidden agenda, which means they start the game face-down with something noted down for them. They can be turned face-up at any time so their effects become known to the entire table and can take place.