Each preconstructed deck was designed with a primary theme and a secondary theme. The main new commander in the deck matches the primary theme, while the alternate new commander matches the secondary theme.[6] For instance, the white/black deck, Call the Spirits, has a primary enchantments theme supported by Daxos the Returned and a secondary lifegain theme supported by Karlov of the Ghost Council.

The only new printed arts are the Boros Signet and Orzhov Signet getting their MTGO arts.

The preconstructed decks were not sold in the MTGO store. Instead, the Legendary Cube event awarded Prize Packs that contained six cards from a selection of the 56 new cards from Commander 2015 and 93 other cards from older Commander, Conspiracy, and Planechase sets. These Prize Packs were the only way for Magic Online players to obtain the new Commander 2015 cards.[7] 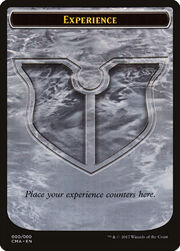 Myriad is a new creature mechanic focused on multiplayer. When a creature with myriad attacks an opponent, that creature's controller gets a temporary copy of it attacking each other opponent.[9]

Bastion Protector is the first card to refer to multiple Commander creatures.