Comic-Con is a four-day event (Thursday-Sunday) held in July or August at the San Diego Convention Center in southern California. It was founded in 1970 and is considered to be the largest convention of its kind in the world.

Originally showcasing primarily comic books and science fiction/fantasy the convention now includes a larger range of pop culture and entertainment elements across virtually all genres, including collectible card games. Until the introduction of HASCON in 2017, a Magic panel always featured big reveals about the Commander series, Duel Decks and the fall set of that year. 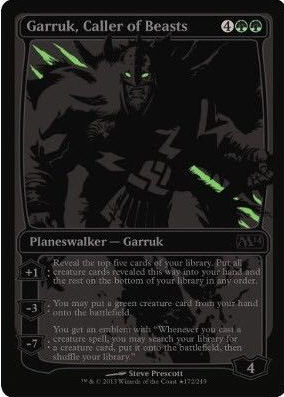 At Comic-Con 2013 the Hasbro ToyShop offered a limited edition collection of Planeswalker cards for sale. The five cards were presented with unique "black-on-black" art by Steve Prescott and were variants of those found in the core Magic 2014 set.[1] These included:

Comic-Con 2014 once again featured premium "black-on-black" core set planeswalkers, this time featuring the six from Magic 2015, illustrated by Jae Lee. In an SDCC exclusive, the six Planeswalker cards could be bought together with the NERF Garruk Axe.[2]

Comic-Con 2015 featured the five double-faced planeswalkers from Magic Origins (the last core set) in premium "black-on-black", illustrated by Wayne Reynolds. The set also came with an exclusive book, called Magic Origins: Planeswalker Anthology. The book explored the backstories of Chandra, Jace, Nissa, Gideon and Liliana. It contained a short story for each planeswalker, plus expanded art from some of the key cards in the set,[3]

Comic-Con 2016 featured the five most recent planeswalker cards of the members from the Gatewatch, where all of them, except Liliana, appeared as zombies. The price of a complete set of these foil cards by Eric Deschamps was $99.99 plus tax (about $108).[4]

Comic-Con 2017 again featured the five most recent planeswalker cards from the members of the Gatewatch (without Ajani), all of them in the Ancient Egypt profile style. In addition there was the most recent Nicol Bolas card, depicting him while putting his spell on the Gatewatch. The Egyptian theme and the counteracted depictions connected to the story of the recent Amonkhet block. The price of a complete set of these foil cards by Vincent Proce, together with a 24” x 36” screen print of Nicol Bolas illustrated by Brandon Holt, was $180.--.[5][6]

The limited edition of Comic-Con 2018 ($99) again featured the five most recent planeswalker cards from the five first members of the Gatewatch, each in front of a stained-glass window depicting a planeswalker from the pre-mending era. The art is by longtime Magic artist Terese Nielsen.[7][8]

Wizards of the Coast had produced sets of planeswalkers every year since the beginning. Gavin Verhey announced his willingness to switch things up a little bit and try some different approaches.[9] For 2019, this turned out to be the Dragon’s Endgame package, featuring Nicol Bolas and his four God-Eternals in a double-sided sleeve and a box that could unfold to display all five cards.[10] The cards themselves featured brand new artwork from Adam Paquette, matched with shadowed frame treatments. Instead of foil, they have a finish that plays up the art treatment:[11]

Comic-Con 2020 was held online due to the COVID-19 pandemic. There were no promos revealed.