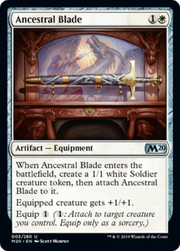 Colored artifacts are artifact cards that have colored mana costs.[1]

The Dissension expansion introduced the concept of colored artifacts with Transguild Courier, which did not not yet require colored mana to cast.[3] The Future Sight expansion's Sarcomite Myr was the first and only artifact card at the time of the set's release to require colored mana for its casting cost. The Shadowmoor expansion's Reaper King was the first artifact card with a hybrid mana cost that contained colored mana symbols, but which enabled players to not have to pay any colored mana to cast the card due to the specifics of the card's hybrid mana cost.

Colored artifacts function very similarly to enchantments. The main distinction is flavor and what cards can destroy it.[7][8] Artifacts are also tapped when they are activated, while Enchantments aren't; a divide that gives artifacts cheaper, once-per-cycle use, while enchantments get weaker, repeatable abilities.

Because traditional artifacts with colorless casting costs can be played by any color, they have a limited design space, and they often must be inefficient to avoid breaking the color pie.[9] Using colored mana in an artifact's casting cost opens up design space for more interesting or efficient artifacts because they can be limited to the color(s) where their effect is appropriate. This is most critical for equipment and vehicles, two artifact-exclusive subtypes; compare Crystal Slipper to Swashbuckling and Strider Harness. Colored artifacts are now considered deciduous.[10] R&D has slowly been ramping up colored artifacts and has concluded that the majority of players seem fine with them.[11][12]