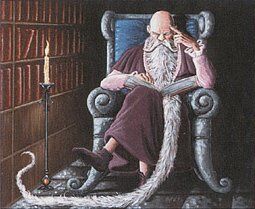 A sage of Lat-Nam. Art by Pete Venters.

The College of Lat-Nam was a school of magic and wizardry founded by Drafna and Hurkyl on the island Lat-Nam (Dominaria).

On Terisiare, magic had not seen prominent usage in some time. Scholarly study on the subject was also very limited. The founders of the college hoped to change that by collecting as much knowledge as possible on the arcane arts. Also, Lat-Nam was a place for the few practitioners of magic left to congregate and share their information. The Library of Lat-Nam contained many tomes on the study of magic.

Many of its mages were killed or eliminated as threats during the Brothers' War and, according to the Greensleeves Trilogy, the school itself was destroyed by the Brothers.

Surviving members took the secrets of the school with them and formed the Institute of Arcane Study on Tamingazin and the School of the Unseen.