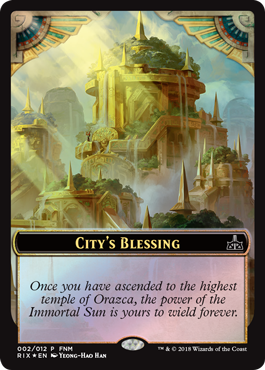 City's Blessing is a player's designation introduced for Rivals of Ixalan. It can be given by the ascend mechanic.[1]

The city's blessing refers to Orazca, the Golden City that the different factions are racing for in the storyline. If you have the city's blessing, you gain a significant advantage depending on the spell you played.

City’s Blessing
A designation a player can have. The ascend keyword causes a player to get this designation once they control ten permanents. See rule 702.130, “Ascend.”

Cards that give the city's blessing[edit | edit source]

All card with Ascend: