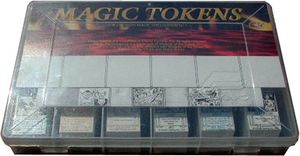 A full box of Magic Tokens.

Citadel Gaming, Inc. produced a series of Magic Tokens starting in 1995. The tokens represented popular creature types of the time and were printed on tiles made from a material called SINTRA. They were intended to be sold individually for 25 cents each.

All of the tokens were designed by Tom Ebling and Mike Brixius and all art was drawn by Chuck and Sherri Marier.

In July 1995, the first print run of 50,000 tokens was created. Dubbed "Alpha", the run consisted of eleven tokens and was printed with black ink and with black borders. Unfortunately, the manufacturer believed that the ink would not bleed when cut but in fact the ink bled down the edges when the die cut the tiles. Though defective, the printer gave them to Citadel to fill orders at local stores in the Willamette Valley (Eugene/Salem, Oregon). After about two weeks, once the cleaner "Beta" tokens arrived, the Citadel owners made a road trip and replaced all the tokens that remained in the stores. The recalled Alpha tokens were land filled.

Almost immediately after discovering problems with Alpha, the second print run ("Beta") of 75,000 tokens was made. They were still printed only in black ink, but the borders were removed. Like Alpha, they were sold in packs of 25 tokens intended for individual sale.

The third printing ("Unlimited") of 150,000 tokens in September 1995 added more tokens, alternate artwork, and multiple colors. They were sold in a store display consisting of a plastic box with 18 receptacles, each of which held 15 tokens of the same type, though with random artwork.

Citadel Gaming, Inc. was founded by Mike Brixius and Tom Ebling. Due to unavoidable flaws in the production process that required manual correction. Citadel closed down in May 1996. Much later it was learned that the manufacturer (The now defunct store display manufacturer Mobius in Eugene Oregon) did not understand SINTRA as well as they thought. Simply heating the dies when cutting would have avoided the production issues.

This was their business address: