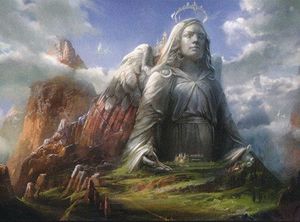 The Temple of Serra at Epityr. Art by Christine Choi.

The Church of Serra is a religion on Dominaria, dedicated to the goddess Serra, who actually was a planeswalker.[1] Its main manifestation are the Serra Angels.

The origins of the religion can be traced back thousands of years to the moment when the planeswalker first visited Dominaria and created her first angels.

In the days of the Sheoltun Empire, Benalia's forerunner, the growing settlement of Epityr rebelled against the Sheoltun and a priest of Serra called forth the Serra Angels to free the town. This rebellion was the last straw, and the weakened Sheoltun Empire soon after lost all control of eastern Terisiare.[2] A lingering resentment against the Church of Serra turned most Benalkin towards the Church of Angelfire.

With the influx of refugees from Serra's Realm after the destruction of that plane, the Church of Serra experienced a revival in Benalia. By the the time of the Phyrexian Invasion, Serra Angels were openly helping the Benalish and currently it is the main religion again.[3] Only House Croger are still Angelfire traditionalists.[4] The new arrivals created floating buildings reminiscent of their home plane, all with round turreted roofs and elegant high arches, the brilliant colors of the window glass glowing in the sunlight.[5]

The religion was strengthened throughout Dominaria when a man who was known as Brother Angus built the Cathedral of Serra around Serra's tomb on the Plains of Sursi.[6] Serra had blessed the land with her passing, to be a sanctuary against the dark forces that assailed her followers. To this day, Serra Angels sometimes spontaneously appear in the Cathedral.[1] 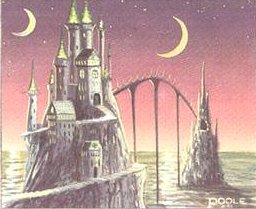 The Cathedral of Serra at Sursi. Art by Mark Poole.

In Serra's Realm, the four virtues of the Church of Serra were codified: art, discourse, freedom, and peace. This is also represented in the quartered circle, one of the symbols of the Serran faith. Another one is the pentagon, representing the five points of balance: law, duty, reason, grace, and truth.[7] Serra's worldview, beliefs, prophecies and wisdom are chronicled in the Song of All.[8]

The church was formerly led by the Serran Mother Superior, and now by Lyra Dawnbringer. The Aven Order of the Ancestor is an order dedicated to the belief that Serra and the Ancestor worshipped on the continent of Otaria are one and the same.[9] The Order of Dawn, led by Lyra Dawnbringer herself, protects Benalia.[10] There are also orders devoted to the four virtues and the five points of balance. There is even a Order of Akroma, which mistakingly considers Akroma to have been a Serra Angel.[7] Other believe that Serra's Blessing contributed to Gerrard Capashen's defeat of Yawgmoth.