From MTG Wiki
(Redirected from Chorus of the Conclave)
Jump to: navigation, search

The Selesnya Conclave is a green/white guild from the plane and city of Ravnica.[1] Introduced in Ravnica: City of Guilds,[2] the guild is also featured in Return to Ravnica and Guilds of Ravnica.[3] 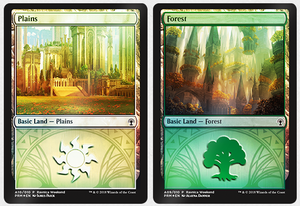 Founded by parun Mat'Selesnya, a female humanoid elemental formed via the fusion of dryads, the Selesnya Conclave is a decentralized collective variably described as a "selfless, nurturing, spiritual group" or a "brainwashing nature cult." It involves itself in the establishment and maintenance of peace, life, and unity in Ravnica.[4] The territories held by the Selesnya are open and sunny, full of green spaces and gardens, with white stone buildings which are often open to the air. The towering world-tree of Vitu-Ghazi once served as the guild's Guildhall.

Despite their appearance of being "good" and "peace-loving", in truth the guild has a sinister streak.[5] The Conclave used to employ its quietmen and other members to silence the civilians of Ravnica. The defenders of the Selesnya are the Ledev Guardians. Equenauts ride pegasuses, combining the role of mounted warriors and scouts. Sagittars are elven archers that defend key guild locations.

The Conclave is organized in enclaves called vernadi, which are communes built around central trees, like smaller versions of Vitu-Ghazi.[6] A dryad, called a voda, is called forth to be the leader of the community, connecting the vernadi to the Worldsoul and the will of the entire Conclave. The vernadi are a harmonious union of nature and civilization. Their house are created by woodshapers and are like living gardens without doors, carefully tended and abundantly fertile. The Selesnya are proud of their wurms, which are used by shamans called wurmcallers to travel underground. The wisest clergy (including many Loxodons), are sometimes called hierarchs, although there is no official hierarchy in the religion. Spellcasters fill both military and religious roles, calling their magic Doruvati ("The gift" of Mat'Selesnya).

Selesnya leadership is composed mainly of dryads. The "guild leader" of Selesnya in the Ravnica: City of Guilds set was a collective mind known as the Chorus of the Conclave, with the top members of the guild as figureheads.

Mat'Selesnya now resides, dormant, within Vitu-Ghazi, having offered herself to preserve order in Selesnya. Currently, three dryads, serving as the new guildmaster, function as her voice. After the Resurgence, the Selesnyans are reorganized into vernadi, small communes led by dryads who speak for the worldmind.

The main seat of Selesnya's power in the region of Utvara was Vitar Yescu, an enormous living tree that produced a pollen that served as an antibody to local plague. The head of Selesnya in Utvara was elven shapeshifter Wrizfar Barkfeather.

During the events of Agents of Artifice, the Selesnya were lynched en masse due to the citizens realising their role in forcing the oppression of the guilds. However, they have returned as of the events of Return to Ravnica. The new Selesnya were officially more concerned with preserving nature, creating places to illuminate the wonders of nature and inspire contemplation — hopefully on the blessings of Mat'selesnya — for all of Ravnica.

Recently, the Conclave has been growing an army, preparing to resist the ambition and destructive impulses of the other guilds and fight, if necessary, to defend their way of life.[6]

During the unrest before the War of the Spark, the three heads of Trostani were in discord.[6] While Harmony remained mysteriously and utterly silent, Order argued in favor of a peace treaty with the other guilds, and Life wanted to focus on building strength of the Conclave. The fact that the dryads were divided meant that Trostani was virtually paralyzed and faded into the background of events. Emmara Tandris stepped forward to fill the void in leadership, after glademaster Garo was revealed to be in league with Nicol Bolas.[7] She was committed to pursuing peace between the guilds with all her heart, even as Trostani hesitated in self-conflict. As a friend of Jace Beleren, she understood that he was never going to be able to settle on Ravnica, so she believed the world needed a replacement for the Living Guildpact. As one of the most active advocates of cooperation among the guilds, she was relying on personal connections with members of other guilds to help that effort.

Emmara and Trostani met with Kaya, Teyo, and Rat when they sought the cooperation of the Selesnya to revive Niv-Mizzet.[8] Emmara spoke to them first, and declined to participate in their plan because Selesnya had always been a victim in Izzet plans. But the party argued that Bolas's victory would bring about end of all life, and Harmony, the middle Trostani, finally woke up and decided that Selesnya would be joining the other guilds to defeat Bolas.[9]

Species and races associated with the Selesnya Conclave include:

Classes associated with the Selesnya Conclave include: