From MTG Wiki
(Redirected from Caves of the Damned)
Jump to: navigation, search 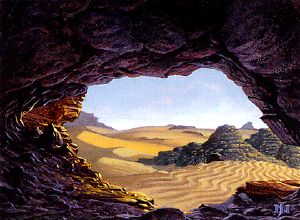 The Caves of Koilos played an important part in the story of the Thran, The Brothers' War and the Phyrexian Invasion. They were located in Koilos, a desert region on Terisiare Dominaria between the Sardian Mountains and the Kher Ridges.

During the time of the Thran Empire, the caves of Koilos were known as the Caves of the Damned and were inhabited by the Untouchables. These people were sick with Phthisis due to too much exposure to powerstones through working in the Mana Rig.

In these caves the planeswalker Dyfed built a permanent portal between Dominaria and Phyrexia. The planar portal could be closed by placing the two halves of the powerstone used to create it onto a pedestal in the caves. At the end of the Thran Civil War Yawgmoth ushered the last survivors into the portal to populate Phyrexia.

The caves were rediscovered by Urza in one of the test flights for his Ornithopter. He, Tocasia and Mishra found an impressive array of artifacts near the caves, all left by the Thran. Urza named the land after the old Argivian word for secret: Koilos.[1] They entered the tunnels and soon discovered the two halves of the powerstone holding the portal closed. Urza and Mishra each claimed one half as theirs. Urza called his the Mightstone and Mishra's the Weakstone, due to their effects.

With this however, they unwittingly opened the portal between Dominaria and Phyrexia.

Phyrexia sent spies out to Dominaria and gradually infiltrated the region. Xantcha was one of the spies that was initially meant to go there. Xantcha betrayed Phyrexia and teamed up with Urza against her former homeplane. They returned to the caves to fight Gix. The fight lasted a long time and it seemed like Gix would win, but Xantcha and her friend Ratepe sacrificed themselves so that Urza could defeat Gix.

While the Phyrexians had the capability by this time to build portals that could be rolled up and operated from any location, the permanent portal in Koilos was still an important site for the Phyrexians to launch attacks from. This made the caves an important battleground throughout the Phyrexian Invasion.