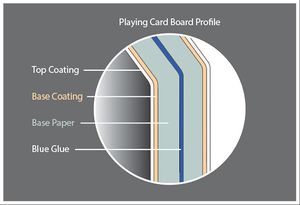 Profile of a Magic card

The card stock used to make print sheets of Magic cards, is a paper stock that is thicker and more durable than normal writing or printing paper, but thinner and more flexible than other forms of paperboard.

The standard stock actually consists of two sheets of special paper of a specific thickness and weight that have been glued together. The line in the middle of the stock is usually described as a plastic but it is a graphite laminate. It is used as a security feature but this is incidental. This layer is what gives Magic cards their “snap” and resilience to being bent and shuffled. It also provides opacity.[1] It is most often blue and is colloquially referred to as the “blue layer”, however it is sometimes black as well depending on where and when the stock was manufactured. Many cards printed by Shepard Poorman have a black layer. The paper receives a surface coating that is applied in layers and calendered (polished) at the factory during manufacturing to achieve a desired surface.[1]

Rules inserts and tokens are made of different cardstock than the rest of the cards. They don't have the opaque layer in the middle.

The card stock that Magic cards have been printed on since Alpha is called Corona and it is only produced in three factories in the world, Arjowiggins in France, Kohler in Germany, and USPC in the USA.[2][1] The USPC only produces the stock for their own use and does not sell it. There is also a domestically available stock called Corona but this is significantly different and lower quality than the Magic card stock. The cheaper stock is more prone to delaminating from humidity, curling from ambient heat, and ink failure due to lack of porosity.

A common complaint with new sets is that the paper is thinner and cheaper however, with few exceptions, the card stock apparently has not changed appreciably since Alpha. It has been shown that the card stock thickens and stiffens with time and humidity. This causes cards which have been open longer and played more to have a different feel than cards fresh from the pack.

In 2017 reports increased about cards that warped, bowed, and curved. This concerned not only foil cards (which are more prone to these problems, anyway), but also regular cards in certain areas.[3] Wizards of the Coast president Chris Cocks later acknowledged the complaints and implied that any variations in the quality of Magic’s card stock came down to, “the old adage: you can have it fast, cheap, or you can have it good.” But he emphasized that Wizards of the Coast is “committed to having all three.”[4]

In 2016 Wizards of the Coast developed an additional Magic stock for the Japanese market. This stock is unique in that it has a different multi-ply construction, which retains all of the technical playing card board characteristics but combines them with added dimensional stability. Some recycled content is added to the certified pulp for this board.[1] Although originally exclusive to Japan, this cardboard was also used for the regular Battlebond and Ultimate Masters releases. This type may be recognized by an additional stiffness, and the way that the cards will fluoresce under UV light.[5]

In 2019, another card stock was added to the portfolio, which featured improvements in surface consistency for printing, improved card cutting, as well as rigidity and "snap."[6]