Box topper cards are Magic cards that appear at the top of a sealed booster box. They are a variant on the Buy-a-Box promos.

Oversized box toppers—approximately 4" x 6" (11 x 15 cm)—appeared in booster boxes from Eighth Edition and Ninth Edition. They were also given away at special events, including E3, Origins Game Fair, Gen Con, and the San Diego Comic-Con.[1] 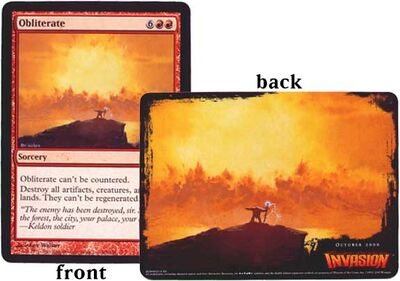 There were 33 different box toppers in Eighth Edition, each picturing a card from the set that had never before been reprinted in a core set.[2] There were supposed to be 34 box toppers, but Giant Badger was axed at the last minute as there was no logo available because it didn't come from an expansion set.[3]

On the front is the card image as it appears in Eighth Edition. On the back is a blow-up of the art, plus the original expansion logo and date.

Only 13 cards were chosen as box toppers for Ninth Edition boxes.

In 2018, box toppers were revived in regular card size. Each booster box of Ultimate Masters came with a random semi-borderless foil box topper, each being available as a regular card in the set, as well. There is a total of 40 box toppers.

For the box toppers of Ikoria: Lair of Behemoths, Wizards of the Coast partnered with Toho Corporation to feature its iconic monsters such as Godzilla, Mothra, and King Ghidorah. These cards are called the Godzilla Series Monster cards.[4] There was a total of 18 different Box topper cards, but three of these were only available in Japan.

Each booster box of Double Masters came with two random Showcase non-foil box toppers, each being available as a regular card in the set, too. There is a total of 40 box toppers. The Box toppers are numbered #333 to #372.