A cycling land is a land with cycling. Cycling lands which produce colored mana are taplands. 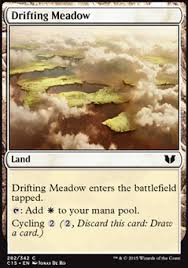 Cycling lands were introduced in Urza's Saga with the Cycling

Later in Onslaught, were introduced another variant with the Cycling M ability, where M is the associated color of each land. They were reprinted in Modern Horizons and are therefore Modern legal.[1]

Hour of Devastation added the Godless Deserts, another variant with the Cycling

M ability, were M is the associated color of each land. They are Deserts.

ability. Unlike other cycling lands these have basic land types.[2]

Ikoria: Lair of Behemoths' introduced a cycle of wedge-colored cycling lands (also known as tricycle lands) that each have the Cycling

ability. Like the bicycle lands, these lands have basic land types.

Besides the cycles there are two other lands, which enter the battlefield untapped and produce