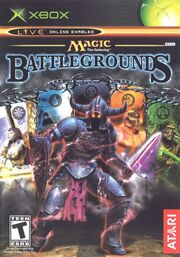 Magic: The Gathering – Battlegrounds was a real time strategy video game for Xbox and Windows based on Magic, though with many fundamental differences.[1][2][3] It was released on November 18, 2003.[4] The game is based on the creation of heroes and mages that summon forth powerful monsters, spells and abilities to defeat the enemy duelist. Duelists learn new magical spells by completing the campaign, with more and more spell books becoming available as the player progresses. Each spell is separated into one of the mana colors, each with their own strengths and weaknesses.