Battle the Horde is a Challenge Deck inspired by Horde Magic that was used at the Born of the Gods Game Day. It's also the name of the sixth quest of the Hero's Path.[1] The deck features the rampaging Minotaurs of Theros, as foretold in the Theriad. 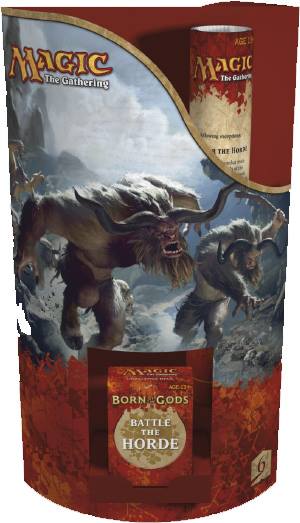 The Challenge Deck is a special self-running deck with its own set of rules, which are printed on the Game Day vinyl playmat. A paper copy of the playmat is included with each Challenge Deck. The 60 card deck contains 15 different cards, which for the first times include artifacts.

2 Descend on the Prey

2 Touch of the Horned God

How to play[edit | edit source] 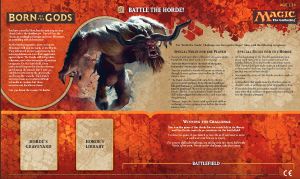 Compared to Face the Hydra, there are important differences to note for Battle the Horde. This deck was designed as a single-player challenge. The rules for Battle the Horde deck are different than for Face the Hydra.[2] In battling the minotaur horde, players can use up to three Hero cards from any of the five earlier Quests. They may only use each Hero Card once.[3] Defeating the Horde means they've earned another Hero Card.

The Horde has no life. Instead, for each 1 damage one card from the Horde's deck is put into the graveyard. You win when the Horde has no cards left in the deck and no more creatures on the battlefield.

Although it was originally announced that Battle the Horde was not convertible to a multiplayer experience, R&D later reversed this.[4][5]