The set contains 274 cards (25 basic lands,[6] 101 commons, 80 uncommons, 53 rares, 15 mythic rares) and includes randomly inserted premium versions of all cards in the set. There are 25 basic lands, instead of the usual 20, and the set also features special full art versions similar to those that appeared in Zendikar.[7][8] The full-art versions appear in booster packs and fat packs, but not in intro packs. The expansion symbol of the set is a broken hedron. While allies represented adventuring parties in the last Zendikar block, they now represent the united army against the Eldrazi. This is also a battle between the colored against the colorless faction.[9] The Eldrazi interact with the exile zone.

Because of the demise of the core sets, R&D experimented with same art reprints in expansion sets (e.g. Felidar Sovereign).[10] As a promotion to further the theme of the set, WotC randomly inserted Expedition cards into Battle for Zendikar boosters.

Battle for Zendikar returns the storyline to Zendikar, a plane of adventure, many treasures, and potent mana supplies. The plane is littered with large, floating polyhedron-shaped stones called hedrons, that were created by Nahiri, the Kor Lithomancer. Together with Ugin and Sorin Markov she used them to trap the horrendous Eldrazi on the plane. Thousands of years later, the meeting of Sarkhan Vol, Chandra Nalaar and Jace Beleren in the Eye of Ugin chamber unintentionally loosened the bonds that kept the Eldrazi in torpor. The Eldrazi were finally released by the elf Nissa Revane, thinking that they would leave Zendikar far behind them. She was wrong. Two years after the initial destruction, at least Ulamog is still around.[11][12]

Now, Gideon Jura takes the lead of a group of planeswalkers in facing the Eldrazi alongside the residents of Zendikar. Meanwhile, the trapped planeswalker-turned-demon Ob Nixilis is desperate for a way off of the plane. The five cards that represent the pivotal moments in the storyline are Gruesome Slaughter, Nissa's Renewal, Ugin's Insight, Outnumber and Aligned Hedron Network.[13][14][15] 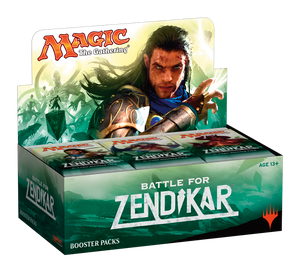 Battle for Zendikar is sold in 16-card boosters (one card being a marketing card), five intro packs, one event deck and a fat pack. The boosters feature art from Ob Nixilis Reignited, Kiora, Master of the Depths, Ulamog's Despoiler, Veteran Warleader and Gideon, Ally of Zendikar.[16]

Zendikar Expeditions are all premium foil cards with a special Zendikari frame and a separate expansion symbol. Thus, they are not part of the set.[17] Zendikar Expeditions include all new art set on Zendikar and appear slightly more often than premium mythic rares. These cards are playable in limited and formats where they're already legal. There are 25 Expedition cards appearing with Battle for Zendikar (the 5 new dual lands, 10 shock lands and 10 fetch lands[18]) and 20 more cards in Oath of the Gatewatch. 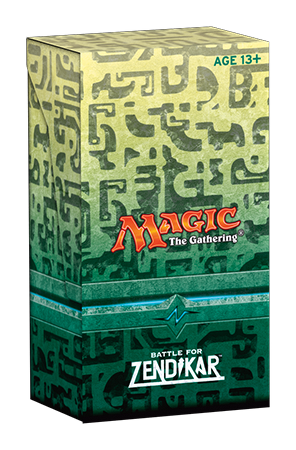 At the prerelease (September 26–27, 2015) each player received a special hedron-themed Prerelease pack that they could use after the event as a take-home deck box.[19] Inside each Prerelease box, there were six regular Battle for Zendikar Booster packs along with a randomized, date-stamped premium promo card, a spindown life counter, a deckbuilding guide and a story insert.[20] Starting with this prerelease, seeded booster packs were no longer used.[21] This prerelease was the first to use the "Vancouver" mulligan rule.[22]

Instead of getting a specific set Prerelease card or one of a small subset of Prerelease cards, starting with Battle for Zendikar players receive a random Prerelease card in their boxes that can be one of any rare or mythic rare in the set.[23]

For this set, the ratio between token cards and other marketing cards was shifted heavily in favor of tokens. The new ratio is approximately 9:10 for tokens. Tokens’ rarity is based upon the rarity of the cards that make them.[25]

There are at five new named mechanics:[31]

A remarkable mechanic is featured on Void Winnower, which cares about "even converted mana cost".[34][35]

Battle for Zendikar introduces the creature types Scion and Processor.

Battle for Zendikar has six cycles:

Battle for Zendikar has a mirrored pair.

Many Battle for Zendikar cards are strictly better, and a handful are strictly worse, than previous cards. Of particular note, Endless One is the simplest and most cost-efficient example of a design previously seen on more than 100 other cards.

Battle for Zendikar has one event deck.